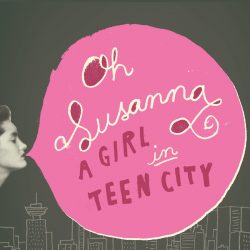 Everyone has been, or will be, a teenager at some point in their lives and although we all have different personal experiences throughout those years, the feelings we have; the sense of hope for the future, the sense of adventure and as you grow older, the sense of nostalgia you have looking back is something that everyone can relate to. Oh Susanna makes an attempt to channel that sense of nostalgia into the twelve songs present on her newest release ‘A Girl In Teen City’ and she does a mighty fine job of it, so much so, that you feel like it could have been your story she is telling.

Taking inspiration from her hometown of Vancouver and the punk scene that it produced when she was younger, Suzie Ungerleider takes us on a journey through adolescence borrowing sounds from different genres such as pop, ballads or punk and mixing it with the storytelling nature of classic country to produce the fresh-yet-familiar sound heard on ‘A Girl In Teen City’. Lyrically, each track serves as a diary entry of sorts, creating a vivid picture in your mind and transporting you there, whether it’s watching a hopeful, teenage band perform in upbeat pop-punk number ‘My Boyfriend’ or reminiscing on a first love in ‘Lucky Star’, Oh Susanna really manages to capture the feeling of growing up throughout. These, however, are just two of the highlights of an album that very rarely falls flat, if at all. Other standout tracks include the melancholy ‘The Darkroom At The School’, ‘Tickets On The Weekend’ which is a track dedicated to the aforementioned punk scene and is littered with 70’s punk references and the final track ‘My Old Vancouver’ which is an ode to growing up in Vancouver and is not only the perfect way to round off the album as it summarises her feelings about her hometown and that time in her life, but it is potentially the best song on the album.

‘A Girl In Teen City’ also has some stellar production work from Jim Bryson who worked with Oh Susanna on her previous record ‘Namedropper’ and is a delight to listen to. Naturally, the vocals are at the forefront and although quite minimalist in terms of how many instruments are present, each one is only present if absolutely necessary and that gives the album a really polished and uncluttered sound. That said, it’s the thought that has gone into the composition that really allows the album to evoke the feeling from the listener and each track has been carefully designed to complement the lyrical content and really helps to bring the record to life.

Overall, ‘A Girl In Teen City’ is a triumph for Suzie Ungerleider and it’s a pleasure to accompany her on her journey down memory lane.

Oh Susanna returns with her poppy, nostalgia-laden story of growing up