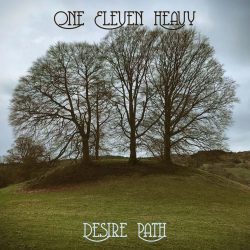 They seem like a particularly American thing, these ever-changing congregations of individuals; coalescing around an idea to make music together while at the same time performing in/with/for numerous other bands. Do these in fact represent ‘real’ bands or are they some kind of short-lived vanity project? One Eleven Heavy are one such congregation who are definitely a band, just not an ‘exclusive’ one.

Something like an open relationship that may be difficult to maintain (especially across continents) but is still capable of producing moments of magic often not experienced in more stable, long term arrangements.

The genesis of One Eleven Heavy was at a meeting between New Yorker James Jackson Toth and Yorkie Nick Mitchell-Maiato at a gig NM-M was promoting for Toth’s then band, Wooden Wand. For this, their second LP they are joined by Hans Chew (drums and piano) and Dan Brown (bass). The pedigree here is clear for all to see when considering the roll call of gigs undertaken by these players with Royal Trux, Hiss Golden Messenger, Steve Gunn, Solar Motel Band, Endless Boogie, Ryley Walker…

That Toth and Mitchell-Maiato united around a fondness for the Grateful Dead is widely acknowledged, however, their shared Royal Trux affinity is perhaps more interesting. The inspirations drawn from this affiliation offer up an approach or attitude to the work rather than a particular sound. Like Royal Trux’ Neil Hagerty, One Eleven Heavy take a position that embraces both the ‘underground’ and the mainstream (why never overground?!). They are at home with the authenticity and freedom of expression found in the underground whilst simultaneously denouncing its disdain for anything perceived as populist or too easily accessible.

This outlook is discernible in the work of all three songwriters: Toth, Mitchell-Maiato and Chew. Occasionally, explicitly so, like in opener ‘Chickenshit’ when they helpfully point out “there’s no use crying encore when there’s no one around”. More often, though, it comes through in an irreverent feeling, a sense of mischief and looseness that is almost playful and given voice by a stream of lyrical put-ons and idiosyncrasies that appear right across the record. So there appears to be a philosophical ambiguity that may lead us to ask if they are actually playing one giant ironic post-modern joke on us all. The conclusion, though, can only be absolutely not. They remain resolutely down to earth from minute one and the whole thing is just too much fun to be anything other than sincere.

It may appear eccentric to declare that a bunch of grizzled 40 something music biz veterans with experience of playing in some serious and even ‘challenging’ bands could be described as playful. Fortunately, the idea is reinforced by the bountiful noise they make, where anything goes as long as it feels good. So we get jubilant New Orleans boogie piano licks and massive uplifting guitar riffs alongside intricate, jazz-inflected instrumental passages with complex (poly)rhythmic nuance and extended psychedelic twin-guitar freak-outs that disappear up the proverbial. Underpinning this unkempt musical open-ground though are deep roots – folkloric as Mitchell-Maiato likes to call them. The music clearly exists (somewhere) in the folk, roots, Americana ether, indeed we might reach for the ‘cosmic American music’ tag if it weren’t almost dulled into cliché and made barren of meaning through arbitrary repetition and overuse. Signifying a band’s sound by comparing them to (apparently) similar bands can be lazy and often specious, but boy is it impossible to avoid when discussing OEH.  Inevitably, they have received comparison to some of the heavyweights of this genre (if that’s what it is) with the Grateful Dead and Little Feet getting most mentions. However, given the evident mix of rhythmic complexity and melodic accessibility evident here the weather-beaten weirdness of a strung-out Meat Puppets may well be closer to home.

Despite what has been a difficult year for them as a band, compounded by the challenges of transatlantic music-making, it seems that One Eleven Heavy have arrived at a location where they are individually and collectively comfortable. From it they have produced a record that is never fraught or strained, one that always feels effortless and freewheeling yet meticulous and self-contained – even when it is being driven headlong with guitar squall. ‘Desire Path’ is a joyful, whole-hearted and captivating record that should unite both the underground cabal and open-minded populists in mutual appreciation.