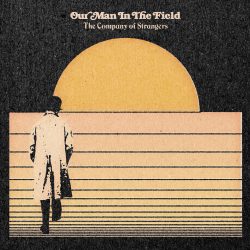 Our Man in the Field, otherwise singer-songwriter Alexander Ellis, reports back from the London small gig scene (in the old world at least) with a set of songs created and evolved by being performed live “wherever the singer-songwriter and folk scenes would have me. It wasn’t always successful, people didn’t always listen, but I learned a lot about the songs; how to play them, how to sing them and what the words really mean.”

To his credit he hasn’t added layers of sounds and instruments just because he can in the studio but left them sounding like they were recorded round a mic by the 4-piece band, as it seems they were. He says, “I wanted the record to sound like; A live recording of a band in a room not caring if there is a bum note here or a beat missed there but with as much “feel” as possible.”

Ellis has achieved that aim. The band, bass player Tom Rosenfeld, Greg Bishop on drums and Pedal Steel player Henry Senior, best known for his work with Danny and the Champions of the World as well as many other acts. It is the Pedal Steel that sets the tone for much of the album, on opening song ‘Thin (I Used To Be Bullet Proof)’, which would have been at home on Neil Young’s ‘Harvest’ and the gentle love song ‘Eleanor’s Song’ particularly. A relaxed shuffle feel marks out much of the album, with the Banjo ‘Easy Going Smile’ and ‘It Is What It Is’ bringing in a more country flavoured sound. The waltz-time ‘Stick Around’ has a distinctly Van Morrison vibe and sets up the final part of the album of which the highlight is the Fred Neil sounding ‘Don’t Speak’. The last song here, the wonderfully titled ‘I Like You So I’ll Kill You Last’ features electric bass and guitar and is a step away from the rest of the album. It was apparently written for the end credits of a film that Ellis, who is also an actor, appeared in.

Ellis’ voice covers quite a range including some highly effective falsetto accenting. It betrays a North East background at times which gives an interesting and unusual feel to the songs. This is a fine debut album played and recorded as Ellis himself says honestly and with feeling.