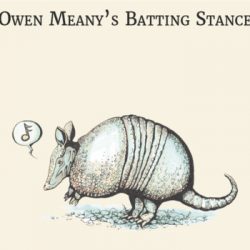 Self-consciously literary songs that owe a debt to the Mountain Goats, a name that is self-consciously of literary genesis and self-conscious references to the Mountain Goats; by now you’re either engaged and ready for what comes next or you’ve already gone. Stick around, for the songs have a bounce and humour that saves them from preciousness or pretension. It’s mainly the work of one man – Daniel Walker – but you’ve probably guessed that. Dissonance gets the Mountain Goats homage out of the way right off the bat, the percussive piano bouncing the song along with a force that is equalled by Walker throwing out the lyrics like they really matter. It’s disarming and charming.

The Goose, But More The Gaggle has a more lo-fi feel with the strum of a weedy guitar, a rumbling bass and cushioned drums – you can hear debt to the Burning Hell (who have been reviewed on this site a few times). It’s at the point where anti-folk reconnected with folk. Pop Odyssey: The First Person Narrative Of The Bottle Of Cola At A House Party is the song that will convert you or repel you – it does exactly what it says on the bottle, a song from a pop bottle perspective and yet it works. It doesn’t sound like an academic exercise, the narrative details and the sheer performance making it irresistible.

Growth is more easily assimilated; a more conventional narrative, a tale of unrequited love and again the lyrical insights and wit pushes it above what can be mundane. Walker has a poet’s eye and pen, and can happily marry them to a tune. He’s one I’ll keep an eye on.

Remember Hartley Goldstein? This reminds me of him.