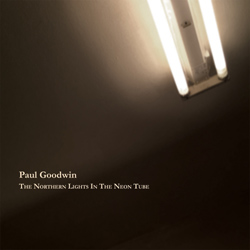 Four years in the making but The Northern Lights In The Neon Tube is not the result of endless hours spent tinkering in the studio, budgets be blasted. Instead the gap is explained by Cambridge musician Goodwin as due to him being, “incredibly slow at doing things.” Well, good things come to those who wait and Goodwin certainly delivers here with a melancholic set of songs that he has handcrafted virtually by himself as he plays all instruments bar drums, the songs recorded at his home.

Goodwin’s voice is a resigned affair, the sound of a man a bit battered by life and ruefully reflecting on the lessons he’s learned, his delivery at times akin to that of Robert Wyatt’s without the high register.  The music for the most part is tentative, slightly folk tinged, at times one was reminded of Roy Harper’s more introspective moments or Bowie’s renditions of Jacques Brel songs.  He does batter into rockier climes as on “Yes, But The Trains Run On Time” which barrels along like a more polite version of The Pogues while “Guilt-Edged Opportunity” rides on a claustrophobic throbbing rhythm with waves of organ thrown over clattering percussion with Goodwin as impassioned as Matt Johnston of The The in his early days.

The heart of the album is in the simpler songs. “A Happy Ending” just Goodwin and his guitar as he sings of the drudgery and humdrum of daily life, “Never Better” in a similar vein with piano and a droning organ added before a climatic guitar infused ending. There’s a sense of ennui throughout with an occasional bitterness, the opening song “Cold Case” a dissection of a relationship chipped away little by little; the opening line the scene of the crime as Goodwin sings, “You know that you’re in trouble when your lover calls you mate.” Lyrically Goodwin waxes poetic throughout as he treads through the emotional minefields laid out for him but he does get to soar on the lilting glide of “Wasted On the Young.”