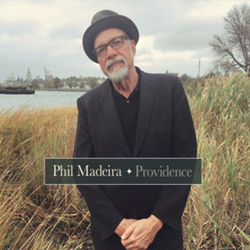 Nashville resident Phil Madeira is an almost perfect example of those “cats” John Sebastian sang about all those years ago. A multi instrumentalist, an in demand session musician, hit songwriter (for Keb’ Mo’, Alison Krauss and The Civil Wars among others) and producer, he’s probably best known as a member of Emmylou Harris’s Red Dirt band and more recently for having helmed (with Harris) two volumes of ‘Mercyland: Hymns for the Rest of Us’, collections of faith based songs sung by several of his famous friends.

One would expect ‘Providence’ to be a dusty collection of Americana songs given Madeira’s history but surprisingly it’s more akin to listening to a piano based jazzy songwriter with most of the songs recorded by a trio with Madeira on piano while Chris Donohue plays upright bass and Bryan Owings handles the drum kit – both again veterans of Harris’s band. The sound they conjure up is not dissimilar to that of Mose Allison or Ben Sidran while Madeira at times recalls Randy Newman vocally. Adding to the sound on several of the songs are the likes of Will Kimbrough, David Mansfield and the legendary jazz guitarist John Scofield while a horn section also pops up.

The songs are all based on Madeira’s memories of growing up on Rhode Island and he paints some vivid portraits of his time there. The opening ‘Wicked Job’ recalls him working as a shelf stacker and dreaming of being a musician, ‘Crescent Park’ has his mother warning him against visiting a local fairground, peopled, as she saw it, with, “perverts and carnies,” while ‘Native Son’ sits somewhat outside the narrative as Madeira sings about the feelings welling up within when he visits his old stomping grounds with the song having a fine elegiac feel.

Although it’s pretty far removed from what we had expected to hear the album is a brilliant listen. The awesome ‘Rich Man’s Town’ has the power and sweep of Ramsay Lewis’s ‘Wade In the Water’ and builds to a tremendous horn fuelled crescendo and Madeira’s piano playing is impressive while Scofield’s guitar on ‘Crescent Park’ is a tutorial in itself. The brilliantly titled ‘A Rhode Island Yankee on Jefferson Davis Court’ (a nod of course to Mark Twain) is the tale of his initial difficulties fitting into the Nashville scene having the wrong accent and is delivered with the sly acumen of Randy Newman and Newman is brought to mind again on the closing ‘Gothenburg’. Here it’s the sentimental Newman as Madeira sings over a mournful piano and string arrangement about his grandfather’s emigration from Sweden to America pointing out the ideal that was the American melting pot, Italian, Irish, Portuguese, all contributing to the modern state. A wonderful song, a timely reminder that America was once seen as having open and welcoming arms, and a fine end to a very fine album.

Nashville cat in a jazzy mood gets all nostalgic