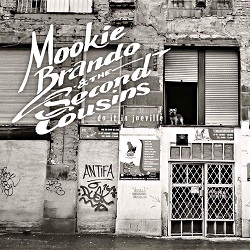 Mookie Brando & The Second Cousins might just be the best Americana band in Hungary – to be honest we’re not that familiar with the Americana scene in Budapest but if there is a better band then they must be damn good. Because Mookie Brando (Toronto born Frank Zsigo) and his not so close relatives hit the sweet spot of ragged-vocalled roots-rock on this, their third album release. ‘Do it in Joeville‘ is a concept album of sorts, with the songs drawing out a series of characters and situations who are tenaciously carrying on in a town that’s not currently at its best. They’re everymen – every day Joe’s in fact – but their concerns are none the less significant for that. Mookie Brando & The Second Cousins are not afraid to bring an epic and anthemic quality to these songs, opener ‘A little bit of something‘ being a perfect example of this. With intertwining male and female vocals and the guitars and drums carried on waves of electric organ the song makes a case that even when things are going less than well and “you’re living the lie you told her” the wise person holds onto the little they still have – whether that’s love or money.

Piano and guitar driven ‘Goodbye Joeville‘ is a series of conflicting couplets – it’s either an enigma to be picked apart or an almost random cut-up of lines describing the chaotic nature of the place. Whichever it is, it’s so perfectly catchy that it sweeps the listener along unquestioningly. ‘Tonight‘ throws in some south of the border swing, and puts the drums dead-centre. It’s feels like a sketch of the perfect night out – but the lyrics suggest it might possibly be the night from hell “I’m giving no assurance / I’m going to test your endurance / we’re going to live it up alright / there are no guarantees / So whatever pleases you / well we’re spoiling for a fight.” The punchy horns keep it the right side of being a downer. Album closer ‘Kind of Girl‘ shows the band’s softer side, at least musically: this acoustic ballad is peppered with less than flattering descriptions of a self-obsessed young woman who plays life like it is a drama starring herself, but still – wouldn’t you know it –  catches attention, and hearts, with unreasonable ease. ‘Do It In Joeville‘ makes a strong case for further exploration of that Hungarian Americana scene – there’s something happening there, and we need to know what it is.