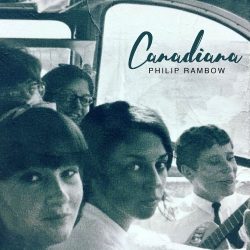 ‘Canadiana’ is the follow up to 2015’s ‘Whatever Happened To Phil Rambow?’ and his Philip Rambow’s debut for Fretsore Records, the label behind releases by My Darling Clementine and Lily Garland. Rambow is originally from Montreal and this album is all about him putting a Canadian spin on Americana tracks (albeit with the perspective of someone who has lived in the UK for many years).

Album-opener ‘American Buffalo’ is a solid Americana song about the near extinction of the buffalo. Powered by a lush backdrop of pedal steel, it brings to the fore icons of the USA, “you easy rider…land of milk and honey…home of rock n roll”.‘Out on Your Own’ is an all-out country waltz ballad. Rambow duets with a female singer and they take turns to lament the end of their relationship in a truly melancholy dong: “Here I’m stuck in a house that once was a home”. A real highlight is ‘Oceans Apart’, an intelligent duet with Sharlene Hector (Basement Jaxx). Vocally it is very strong and the lyrical tug of war around long-distance love is well-observed.

At the other extreme, it’s filled with upbeat, heartwarming tracks like ‘Springtime in My Heart’ and ‘Piggin’ Out’. Rambow seems to relish playing with lyrics and using fun rock n’ roll riffs to lift his music. ‘Things are not looking good’ has a swinging rock n’ roll vibe. The fiddle keeps the tempo going throughout. It’s packed full of fun, light touch vignettes: “There’s a fox in chicken run, a diamond down the loo, the scarecrows fallen over, I don’t know what to do”.  It has a “live” feel to the track and it’s easy to imagine a room filled with jive dancers.

‘Canadiana’ is a mixed bag of songs. Strong Americana tracks and serious lyrics rub shoulders with honky-tonk and rock n’ roll. Track to track you are never sure what to expect next. The great production and quality vocals hold things together.

A well balanced album of quirky lyrics and serious Americana