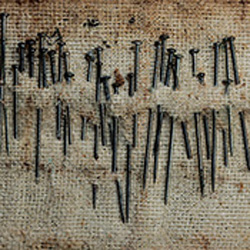 It’s a wee bit embarrassing to confess that despite a 20 year career, 12 albums and the late John Peel a fan of the band that this reviewer has never heard of Piano Magic. In defence they are not common or garden Americana UK fodder, their songs unfolding somewhat glacially over an electronic pulse that’s embellished by washes of guitar as Glen Johnson’s disembodied and almost spoken vocals slowly delve into existential conundrums. However there are several moments here when the songs positively soar, sometimes borne aloft on a waft of string arrangements.  Lyrically there are echoes of Nick Cave, L. Cohen and Momus while the arrangements have a mild whiff of The Go Betweens and The Walkabouts all adding up to some fine melancholic soul searching.

There’s atmosphere aplenty here. The opening 10 minute title song a slow ride of regret and farewell as Johnson proclaims, “I’d rather stick a sword in my eye than go through this again.” A Herculean effort the song rides waves of emotion and turbulence as it progresses from an initial sense of ennui to swells of choral voices and crashing guitars. The remainder of the songs are more succinct but dwell in the same emotional spaces with Let Me Introduce You dominated by a powerful guitar thrust while Living For Other People is a glorious slice of baroque chamber pop that’s not too far removed from The Devine Comedy with Johnson excelling in his spoken word interlude at the centre of the song.

Apparently, this is to be the last album from this band but at the very least they’re going out on a high note.

Swansong from self proclaimed “ghost rockers.”