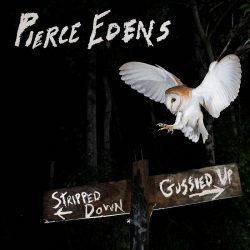 Hailing from North Carolina, Pierce Edens’s stock in trade is a folksy grunge. Musically speaking it’s played very well by Edens along with sidekick Kevin Reese – the songs are suitably dark and foreboding. Vocally speaking, it’s a little harder to pin down. The ‘grunge meets ragged lounge singer’, occasionally bombastic nature of Eden’s voice doesn’t always gel with the eerie, acoustic soundscapes too well. To these ears, Pearl Jam stands out as something of a vocal and song writing influence – a bona fide rock sound as a starting point.

As a result of this mismatch, probably the best track here is the fairly straight Tom Waits cover Mr Siegal (a good song to start with). Daffodil is pretty good too, a simple acoustic and slide guitar arrangement, but the voice detracts rather than accentuating the appeal. Body again demonstrates a high regard for Tom Waits – Edens (in part) singing/shouting ‘in tongues’, as some deranged Deliverance character might do, over a highly Waitsy blues riff. He’s at his best vocally when he’s singing an ‘angry’ song such as this one. The music is stark and bleak, the songs are generally of a high standard, yet the vocals are sometimes too overt and bombastic for their setting

Eleven broken and battered folksy tracks that are certainly stripped down, but in this case the ‘less’ falls a little short of being ‘more’.