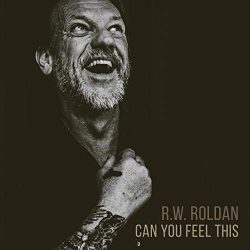 Ray William Roldan is based in Topanga CA. part of western Los Angeles. As an artist, he likes to be called R.W. Roldan. This album is memorable and remarkable. The first track, is just the right introduction to RW’s work: Here he is, telling a story of American life as it was and still is, picking the perfect protagonist, a singer, a girl, “a falling star/ Out behind a honky-tonk bar,” realising that the “Road to fame was too damn long,” and “Nothing felt right.” At his point in the narrative, RW is joined by Jenna Blake (from the group, Valley Shine from L.A.) singing harmony and backing up the idea of the hardness of a boarding house life where “Paradise can feel like hell/ When you’re waiting for the sound of that dinner bell.”

This is a world that veers from “a rock ‘n’ roll dream,” from riding on a greyhound bus, to being all alone, “where every stranger seems a little too nice.” The dangers for a young singer on the road! Memorable – and RW’s voice carries the force of the story perfectly. All of the album rises to this standard. Each track demands and benefits from the same kind of attention.

‘Bad Love Pain’ is an easy, three-word, mind-catching phrase that captures one’s attention. Again, the nervy nature of the words like “The precious little bruise in the heart” are unsettlingly memorable. So it is with the repeated title, leading to the bridge, and the conclusion where, inevitably “She headed back to that bad love pain.”

Watch out for ‘Big Skies’ and catch the California references: “Amarillo,” and “Ventura Freeway,” listening again to America perhaps, “Chewing on a piece of grass?” But that was a different band, a different age. Here, in a different era, is a thoughtful song. RW regrets the passing of the emblems of the old West. He remembers a time even before that, when he watched Roy Rodgers and Trigger on the big screen. Now he yearns for the “ole country songs.”

‘Night Before’ is the sad sad story of a parting long ago, and a heart that turned to stone; unforgettable, like the whole album. Here the repeated words of the title suffuse the agony of regret which is underlined by Eamon Ryland’s console steel guitar weeping behind. Perfect.

Eamon, godson of Ry Cooder, also plays on ‘Lauren’s Song.’ He is RW’s neighbour up in Topanga Canyon where Alan Wilson of Canned Heat lived. Oh, those connections! And the song is as sweet as sunshine.

Every track in the collection thus stands out in its own way. Briefly then: get the measure of the second couplet in ‘Wyatt Earp’: “The bad are getting richer/ And the poor get the bill.” With the ultimate question: “Do I put my faith in God/ Or in Earp’s ten-gauge trigger?”

In another track ‘The Colour of’ RW expresses the hope that one day we will share in the wisdom of compassion, fairness and equality in life. A song, that through its delivery holds a future for RW as a teller perhaps.

And the last track, a singalong, gospel Civil War type of story, serious in its faith in life, and acceptance of it, encouraging us to ‘Drift Away’ positively. The clues are given in the glimpses provided: “the noose pulled taught, “Young brother of mine,” and “The peace of slumbering time.”