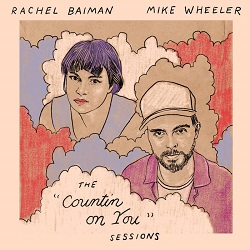 Raised in Chicago, Rachel Baiman has made her mark as a fiddle player in a number of traditional and folk styles. She’s also been more than busy over the last year or so with the release of a flurry of EPs and singles of which this latest – a collaboration with Mike Wheeler – is the latest. It’s a short series of well matched duets – with Baiman’s fiddle and voice perfectly complementing Mike Wheeler’s gruffer vocal and guitar playing. The pair have known each other for sometime – Wheeler was in a bluegrass band with Baiman’s husband. After that band’s demise, Mike Wheeler found himself drifting somewhat, before settling for a while in Baiman’s neck of the woods – Nashville.

The duo had played a few gigs in Nashville but only decided to record when Mike Wheeler decided he’d soon be moving on to try his luck in Colorado, and ‘The Countin’ on You Sessions‘ is the fruit of that labour. The title track is a poignant plea for someone to be worth relying on, when everything else is letting you down – but things aren’t looking promising: “maybe there’s some better after this that isn’t you.”

‘Turn it Off‘ sees Rachel Baiman switching to banjo for a perfect piece of meditative old-timey music, gorgeously harmonising vocals looking for all the ways to escape from the difficulties of the world, whilst ‘Until You Came Along‘ is a traditional country tune, with a modern theme as Rachel Baiman declares “I’m just an old cowboy and I’m used to my ways / singing all night working all day” before admitting that things have changed, “I always thought that I’d find me a wife / A woman to hold / … / But now he’s staying, not a woman at all / strong as an ox and handsome and tall.”  It’s a well handled, not clumsy at all, twist on what’s expected from such a song – a tentative acceptance that love is love, and that’s ok.  In all it’s just a shame that Rachel Bierman and Mike Wheeler didn’t have time to cut a few more tracks.