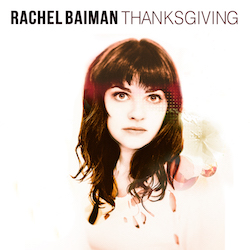 track EP showcases bluegrass music at its very best. Rachel Baiman is a Nashville-based roots songwriter with a conscience, delivering songs that explore the less shiny side of the holiday season. Clearly this work references Thanksgiving but the issues and feelings raised are easily transferrable to the Christmas and New Year holidays. The opening track ‘Tent City’ deals with the plight of the homeless and generally less fortunate, albeit with an infectiously catchy tune and some fantastic banjo picking. We’re told that the story is based on Baiman’s own experiences as a caterer during which she would pass food to homeless families but it’s also a comment on the issue of people being left behind in Nashville due to the City’s rapid expansion.

The title track is based on a two-year-old fight against the Dakota Access Pipeline, mentioning the tensions around this which is a simile for those experienced during the holiday period even though the long-term effects are less permanent. As Baiman comments on her website: “The irony of Thanksgiving being celebrated right as people were being arrested and sprayed with water guns for protecting their right to clean water really hit me”.

The only non original track here is ‘Madison, Tennessee’ a song by the late great John Hartford where Baiman is joined by Molly Tuttle who provides vocals and flat picking guitar of which she is a undoubted expert. She is also accompanied on the last track ‘Times Like These’ by Josh Oliver a Tennessee native for an uplifting song with the lines “Open the window / And let in the breeze / Darling I need you / Living in times like these,” making reference to the way partners help each other through. Baiman and Oliver sound uncannily like Caitlin Cary and Thad Cockrell on their 2005 album ‘Begonias.’

For fans of the bluegrass style this EP is a must have although this is superb music which needs to be listened to on its own merit. And the good news is that there is a full-length album out there called ‘Shame’ released in 2017 which is just as good.

Four track bluegrass EP showcasing the genre at its best