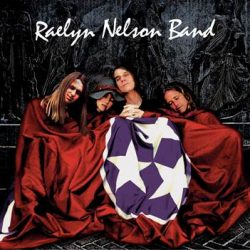 A name ending in Nelson gets you excited as a reviewer in this genre of music, hoping that you’ve been given the opportunity to listen to Willie Nelson’s or Lukas Nelson’s music before its official release. Yet I was pleasantly surprised to see a different Nelson for me to review in Raelyn, the grand-daughter of the great Willie Nelson. But whilst a name can be helpful in putting you on the scene, I was intrigued to see if she was taking her chance like her esteemed family members.

Raelyn plays what she calls ‘country/garage rock’ and thus endeavours to draw in a wide audience with the album ‘Don’t’. The album starts with the song ‘Weed and Whiskey’, a title that has become so popular recently. The song itself is a fun complaint, asking why on earth Weed is illegal, and Nelson encourages us to come and ‘have a puff’ with her. The album, and this song in particular, has elements of country star Margo Price in it. These two know each other well, playing at Rolling Stone’s inaugural showcase 5 years ago on the same bill.

Raelyn doesn’t really neatly fit into any genre, and that’s almost what she thrives off, her ability to switch between country songs and punk songs. She has shared the stage with legendary punk band The Descendents, and you can see how that comes through in each of the songs. The sound is inherently country based, whilst the guitar solos feel much more in the punk genre. This can be seen in the song ‘About That’, where Nelson tells us that now she ‘is leaving and never coming back’, despite her nerves at telling her boyfriend. The guitar solos in particular are used here as great fillers and linking sections.

What the album lacks bizarrely is a lot of difference between songs. After one listen through, you feel like you’ve heard the same song at least 3 or 4 times with the same drum beat and same country/punk guitar tune throughout. Where we do get the occasional difference is where the album shines.

The song ‘Pieces’ feels like a fun Punk/Pop song with a country riff (what more could you ask for), making it the standout of the album. And the sudden breakdown for every chorus is something different and shows cleverness that perhaps should be shown in the rest of the album.

Nothing bad can be said about the voice of Raelyn – powerful and rhythmic, it is great to hear a female voice on this style of music. But for a 10 song album I expected more variety and am begging for more fun tracks like ‘Pieces’ and the final track ‘Rebel Girl’, a real punk/garage track with some great power, telling the ‘Rebel Girl’ that she is the ‘Queen of my World’. Raelyn, though, isn’t there for me just yet.

An album that needs something more than it gives us