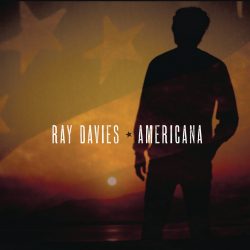 Ray Davies return with his first album in a decade, if we discount the various Kinks collaborations and choral reworking.  It stands as a testament that everything changes and nothing changes since Working Man’s Café dropped as the newly knighted Sir Ray turns his attention to the country which has had a profound effect on his life, America, yet still manages to return to the recurring themes of isolation reaction to change in the modern world.

One of the most striking aspects of this Americana is that Davies could have taken the easy, and very lucrative, route a few years back and reformed The Kinks with brother Dave, thereby unleashing all manner of re-packaged greatest hits and arena tours. He could have sat back in his Highgate retreat and watched the cash roll in, or even, Heaven forbid, record an album of tributes to his heroes like Big Bill Broonzy and Elmore James. But no, that would not be the Davies way at all. Instead he has pulled a masterstroke of enlisting US legends The Jayhawks as his backing band and delivered an album that is wrought from his ever complex relationship with the United States.

Originally part of the “British Invasion”, referenced in the track The Invaders, The Kinks never really broke America for a range of reasons, some of which will possibly never be clear. However, a fascination with American Blues records that hooked Ray and his brother Dave in the early ‘60’s, lit a fire that clearly still burns deep within the creator of this outstanding album.

Davies manages to chronicle elements of his experience across the pond and still weave in the observational genius that is his hallmark. The hustler-style escapism of The Deal provides an idealised version of Los Angeles, but the irresistible Poetry is a superb counter. Drawing on the timeless Davies themes of disillusionment with the modern world, this is a Twentieth Century Man, the classic track from Muswell Hillbillies, for the Twenty First Century. Davies looks aghast at the corporate infiltration of every aspect of American life and asks “where is the poetry”?

The chemistry created by working with The Jayhawks is never better illustrated than on twin tracks Message From The Road and A Place In Your Heart where the sublime vocals of Karen Grotberg blend with Davies’s to deliver two beautiful pieces on the often quirky reality of the relationships of rock stars. Two songs that showcase the writing and arrangement skills of Davies to perfection and, if given wider airplay, would blow a lot of the current white noise out of the water.

But he’s not finished there as Americana goes on to feature Davies reading an extract from his book of the same name about an afternoon spent with Alex Chilton that leads into Rock ‘N’ Roll Cowboys, a track that references reality for the musicians of Davies’s generation.

Davies’s song-writing is as strong as ever, he even gives us a quick blast of All Day and All of the Night during The Man Upstairs which sits well in what is, in many respects an overview of his career. It’s reassuring to see Davies in prime innovative form after such a long break and if the overall impact of Americana may not be quite a work of genius, it is definitely a genius at work.

Kinks frontman blasts back with a flourish of American Beauty.