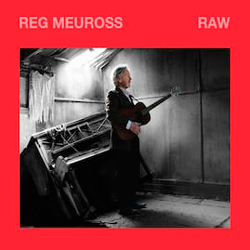 Normally AUK doesn’t review releases sent to us more than six months after their release. This album, the third in a trilogy of stripped back folk songs from Reg Meuross, was originally released back in October 2019 but a brand new vinyl version has just hit the shelves, joining its two trilogy siblings on wax and it was this we were asked to peruse.

The trilogy was partly inspired by Meuross’s acquisition of a rare 1944 Martin guitar along with fan requests for recordings which reflected his solo gigs. ‘December’ was a set of reflective songs while the follow-up, ‘Faraway People’, had a more political bent being a set of modern protest songs. ‘Raw’, the most stripped back of the three, sits somewhere in between with Meuross digging into archaeological evidence of past injustice along with romantic notions of rock’n’rollers and outlaws.

The album opens with Meuross slyly aping Dylan’s habit of stealing melodies by stealing from Dylan. ‘We Looked Away’ mixes ‘One Too Many Mornings’ and ‘The Times They Are A Changing’ as he admonishes the general apathy of the public when it comes to the major stories of the times. From this topical beginning, Meuross gets historical on several songs including ‘The Crossbones Graveyard’, inspired by a paupers’ graveyard in London, and the powerful diatribe, ‘The Chainmakers’, a hymn to the working classes in the best tradition of Guthrie and MacColl. Switching to dulcimer, Meuross comes across like an Appalachian Geordie on ‘The Coalminer’s Song’ and there’s also a banjo offering on the simple but affecting ‘Stay’.

While he’s well capable of wringing out all the pathos in his simple portrait of a local community on ‘Our Street’, a song which is like an aural version of a Lowry painting, our favourite song here was ‘Gene Vincent Junior & Billy The Kid’. Here Meuross tells a tale of meeting two alleged descendants of the titular heroes. He admits they might be fantasists but celebrates their right to be so.

All in all ‘Raw’ is an admirable album and our vinyl copy arrived in pristine shape, allowing Meuross’s simple songs to ring clear while it was a relief not to have to don spectacles to read the lyrics in the insert.