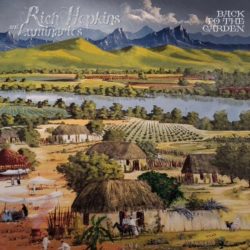 Rich Hopkins and Luminarios latest release ‘Back to the Garden’ is definitely full of guitars. From acoustic to jangly backing to soaring electric solos, there are guitars aplenty. What results is a big sound for the album with some tracks meandering along letting the music lead, perhaps to the detriment of the vocal and lyrics. That’s not always the case though, it’s just a bit of a mixed bag. Hopkins has worked with a number of bands over his career (spanning three decades) including the Sidewinders, Sand Rubies, Underbelly and many other projects. However, it’s Luminarios who are his constant. Singer-songwriter (and Hopkins’ wife), Lisa Novak features strongly on this latest release providing songwriting as well as lead vocals and harmonies. Her influence can be felt throughout bringing melody to this gritty and at times rough-round-the-edges album.

Funny that the press information with this album described Hopkins as “the Godfather of desert rock” as images of snakes and dusty plains are immediately evoked by album-opener ‘Acoma Mary’. The track actually begins with what sounds like a rattler in the undergrowth.

Songs like ‘Always a Way’ and ‘Til’ I’m Gone‘ are heavily-led by guitars, and while suitably catchy, the lyrics just aren’t quite interesting enough. There’s a heavy reliance on the chorus to carry the songs (imagine these will be great heard live) but there’s only so many times to hear “You won’t see me til I’m go-o-o-o-one” before it fades into background noise.

There’s some experimentation with different styles ‘Before’ starts very heavy and plods along vocally, it’s actually quite sinister and creeping. Novak delivers the lyrics “say goodbye to the world that you know” and there’s some great harmonies between her and Hopkins.

There are a few softer songs that work really well. Removing the reliance on huge guitar solos gives the message and melody time to be heard. ‘Another State of Mind’ is an honest take on wanting a change of scene, accompanied by a more acoustic approach, Hopkins has a lovely tone to his voice when not trying to be heard over guitars: “Just go and move away across the USA to another state of mind”. On ‘Keep Shinin’’ Novak takes the lead, it’s a slow and laid-back track and feels much more country.

‘Get off the Telephone’ and ‘Pissed’ feature Hopkins in faux angry mode and the focus is on the talk-singing/shouting. Both tracks are loud and aggressive and feature comments on the world’s social dependence on technology: “off to the desert just to clear my mind…I think the phone’s replaced our brains”.

Real surprise is the elegant and meandering ending to the album: ‘The Garden’. It’s a homage to love and is eloquently delivered by Novak, backed by some beautiful guitar work. While some of the songs on the album feel long, this epic, at 8 minutes 42 works well – there’s obviously plenty of time for a gorgeous, soaring guitar solo – but it leaves us with the simplest of messages about life “All that’s grown here are seeds of love…all that matters is who you love”.