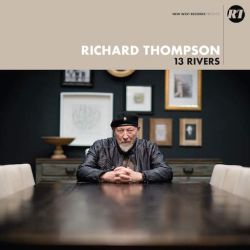 Richard Thompson has been making great albums for fifty years and his latest doesn’t buck that trend.  In fact it’s easily his best for a decade, possibly more.  Backed as usual by Michael Jerome on drums and Taras Prodaniuk on bass, with a bit of second guitar from Bobby Eichorn, he tears off jagged and furious guitar solos and spits out lyrics that fizz and seethe with a level of intensity, anger and fire that a man half his age (or younger) would struggle to match.

His guitar playing has always been peerless but his songwriting hasn’t always matched it.  That’s not the case here.  Whether it’s ‘My Rock, My Rope’ (one of the quieter pieces), a spiritual plea of rare power, or the often brutal ‘The Rattle Within’ and its recognition that inner conflict and doubt can undercut everything in a human being (“Just when you think you’re horse is running/just when you think you’re fixing to win/there’s that wondering deep inside you/who’s gonna save you from the rattle within?”) he nails it on every one of the thirteen songs.  Some are challenging and verging on the opaque, ‘Bones Of Gilead’ for example, but are still hugely satisfying.  Others are more straight ahead like the dissecting of someone for whom evil would not be too strong a word on ‘The Dog In You’.

None of ‘13 Rivers’ could be described as an easy listen but Thompson never has been and his combination of lyrical insight and power allied to guitar work that will make your jaw drop is utterly compelling.  An album to stand foursquare with Thompson’s best work.