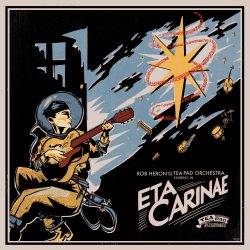 Rob Heron & The Tea Pad Orchestra describe themselves as a genre-hopping roots quintet from Newcastle. Their new EP, named after a star system, certainly covers a fair bit of ground. Opener ‘Swinging Like a Brick‘ barrels along on an organ riff straight out of ’60s garage rock, while ‘Basket Full of Nothing‘ shows us what The Stray Cats would sound like if Tom Waits wrote their lyrics.

‘Black Dog’ slows the pace down with the feel of a vintage horror film soundtrack. It’s the least “roots” of the songs featured here, but as with everything on the EP grows on you after a few listens. ‘Eta Carinae‘ closes things out and adds strings to the five-piece band. The story of the girl, or perhaps it is a star, starts on the back cover of the record and continues in the song itself. The version of the record sent to AUK includes a radio edit of ‘Eta Carinae‘, which benefits from losing the extended closing section. The band claim this song is reminiscent of The Beatles and that the whole EP shows their sound evolving. If it is an experiment then it is only partially successful as the music does end up sounding a bit lost. It doesn’t seem able to make up its mind if it wants to be Rockabilly with a bit of Western Swing or full-on 60s pastiche. The best bits are certainly where roots win out over the 60s. The first two songs are the most fun and straightforward.

Perhaps they may look to embrace their newer influences a bit more wholeheartedly next time. The Soviet/SciFi sleeve will look great as a 12-inch artwork. The EP is being released as a limited edition of 300 vinyl copies so don’t delay if this is for you.

’60s influences creeping into their roots sound, a work in progress