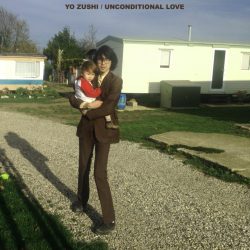 With publicity notes telling us that Japanese-Anglo artist Yo Zushi has spent a decade “bankrupting small labels with uncommercial music” and which describe his musical status as “absolutely obscure”, before first listening to ‘Unconditional Love’,  you could be forgiven for wondering what the heck it was you had to review this month.

It comes as something of a surprise, then, that ‘Unconditional Love’ is actually a fairly mainstream kind of back-porch Americana-flavoured folk music, its ten songs stripped back to a minimalist, low-fi (Yo Zushi calls it “low-fat”) combination of a lone singer plus a single acoustic guitar. Only very occasional dabs of harmonica and backing vocals are added to this overall combination, but these last two ingredients are very welcome when they crop up, given the rather Spartan nature of the format.

Mostly recorded live (although without any sound of an audience or applause), Yo Zushi’s restrained, almost laconic style of singing of what appear to be fairly conventional-sounding folk songs is so neutral and unthreatening that at times you feel as if you wandered off for a quick  toilet’n’fag break, you’d be hard pushed to tell how many tracks you’d missed when you came back. However, rather like Leonard Cohen, once the penny drops that the music is essentially something easily digestible on which to hang some very striking, if quietly stated lyrics, you begin wishing you’d crossed your legs, held on for a bit longer and listened a lot harder from the get-go.

That’s because as you might expect from an album cover showing Yo Zushi dressed in a rather plain brown  suit and holding his young child in a slightly grotty, anonymous-looking trailer park of mobile homes, ‘Unconditional Love’ consists mainly  of finely drawn miniature portraits and reflections of, and about,  “normal” urban life, love and fatherhood. Some tracks are more uplifting, others downright quirky, and not a few are  spliced with what sounds suspiciously like the edges of a major mid-life existentialist crisis. But all are, given the familiar folk song formats, if not exactly hummable, at the least very easy on the ear.

Where Zushi is at his most heart-warmingly affectionate and open is when singing about his kid, like in ‘Back to You’: “You don’t know how to eat you can hardly walk / You don’t know how to draw when we give you chalk / But we love it when you tug at a flower by the stalk and hear a rustling.”

But in the best tradition of kitchen-sink drama, too,  elsewhere there’s a fair amount of desperation and angst bubbling underneath the surface. In songs like ‘Funny’,  for example, Zushi lurches between images of everyday modern life and a sensation of losing contact with the real world.

“These eggs are runny, just liked I asked for / Outside it’s sunny / I don’t feel anything.”

And then there’s some brutal honesty about the temporary nature of many relationships in lines in ‘Broken Arrow’ like: “When I’m all alone on the last bus out, will I wonder where you are?”

The one track that never really makes it out of the starter’s gate is ‘Ms Columbo’, which, possibly because it’s the only instrumental on an album that is so lyrically driven and and stylistically low-key, comes across as pleasant enough, but wholly unremarkable.

Fortunately, the rest of the album is anything but that, and whilst there is some real internal misery on some tracks, ‘Red Light’ and ‘Night Life’ are resoundingly optimistic.

All in all, then, for “low-fat” music, ‘Unconditional Love’ nonetheless packs a heck of a lot of good flavour.