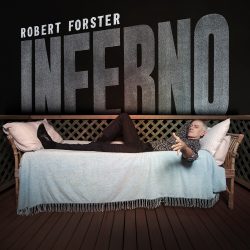 It has been four years since Robert Forster released ‘Songs to Play’ and he has, as ever, taken “time to do my thing”. This has resulted in an album that is constrained in style yet expansive in personal expression. Each song captures a distinct emotion through the use of the literal to detail a moment, acutely observed.

It would be difficult to review an album by Forster without commenting on his vocal style. He combines the spoken word elements of Lou Reed and Leonard Cohen with more wistful, plaintive overtones and characteristic droll largesse. This is well accompanied by the talents of the musicians that are never frenetic in their approach, yet remain on point as they move through the album.

The varied musical style utilises the talents of the musicians to bring all of Forster’s experience with him in both an emotional and musical context. A residual of the Go-Betweens jangling pop aesthetic is evident in “No Fame” where “Inferno Brisbane in Summer” is redolent of Roxy Music.

Forster remains characteristically prickly. In “No Fame”, “Remain” and “I’m Gonna Tell It” he explores the critical elements of personal achievement and recognition with varying degrees of frustration and acceptance. The standout number is the closing track “One Bird In The Sky” which builds throughout, employing violin and piano to maximum expansive effect.

Each song is a handcrafted observation of emotion that explores Forster’s own personal journey. This combines with his mastery of the literal which leaves an allegorical feel. At the end, there is an impression you have been privy to something more, although you may not be sure quite what it was you might have missed. The urge is to play it once again, which will not disappoint.

It is perhaps with an air of inevitability that this album will likely receive critical acclaim and yet do nothing to enhance his wider recognition as a modern singer/songwriter. For those already familiar with his work, they will be delighted to observe Robert Forster continues to “eat only what I eat, breathe only what I breathe, and then leave”.