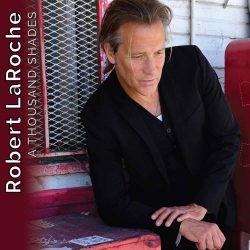 The six songs on Robert LaRoche’s new EP, ‘A Thousand Shades’, chart a journey through addictive, obsessive love and relationship break-ups. LaRoche’s pop background in The Sighs is evident in the rhythms, the warm vocal and the variety in pace and tone. This is the Austin-singer’s second solo release, characterised by catchy, immediately likeable melodies.

The opening track, ‘Seeds of Doubt’, begins with strings over a strong rhythm before LaRoche sings about making: “…sense of where it all went wrong / And how long the seeds of doubt were growing.” This recurring theme of romantic disappointment and the: “…litany of failures scratching at my door,” is addressed head-on through straightforward lyrics with an earnest simplicity in the expression and introspection. ‘Drawn to You’, a song about obsession and dependency, showcases LaRoche’s heartfelt, clean and clear vocal, high in the mix. This leads into the gently rhythmic title track, which is the EP’s most hopeful song about making the conscious decision to change path and: “…put that dark life on the shelf.” There is, once again, a pleasing vocal melody and an engaging bassline throughout this short song.

A change of pace for ‘Jet Blue’ brings the guitar to the fore. There’s an effective electric guitar solo that flows well from the tune and layered instrumentation. It’s faster, rockier and attention-grabbing. However, when LaRoche slows it all down for the next track, ‘Too Much at Once’, he creates the EP’s highlight. This more mellow song about the intensity of being together physically during a long-distance relationship benefits from beautiful strings winding around the bass, percussion and vocal. An arresting moment is when most of the instruments pause and the jerky, bouncing staccato strings accompany LaRoche through the chorus. Rather than a lengthy lyric, there are two short verses and a chorus that are repeated three times, which works well in building the song towards its climax. The final song is ‘The Dream is Gone’, which is another rocker with jangly guitars and a solo that matches the mood and tone well. It’s a strong finish to the EP with a good vocal performance from LaRoche.

Lyrically, the songs perhaps lack the narrative detail to draw the listener in fully and sometimes slip into well-used phrases, such as “…sinking ship…”, “…spark of life…” and “…seeds of doubt.” But the songs are heartfelt and emotionally honest. While this release doesn’t break new ground, its quality is consistent and LaRoche demonstrates that he is capable of crafting good songs with pleasing vocal melodies and hooks. LaRoche sings well and, in the short EP format, the songs work together with a cohesive identity but enough variety to maintain interest. ‘A Thousand Shades’ is worth a spin.