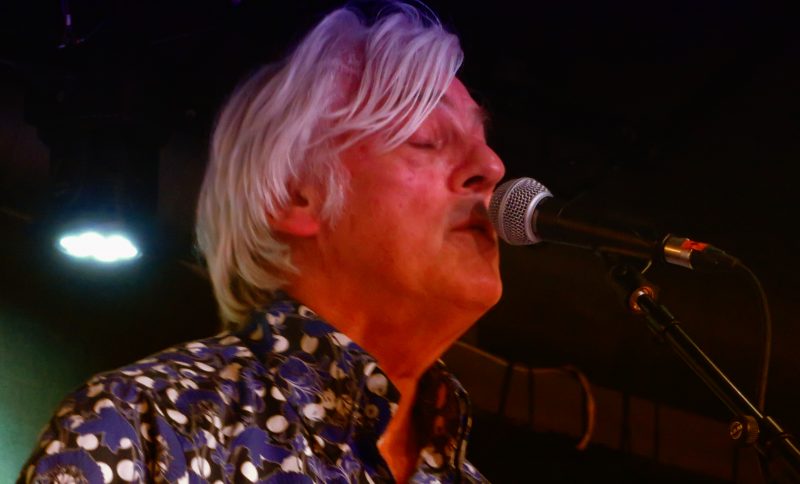 There are precious few things better than spending an evening in the company of Robyn Hitchcock and when that evening is being held in a brewery, than, all the better for that. However, this wasn’t a raucous event, with a seated audience mainly drinking in Hitchcock’s songs and his usual, unusual song introductions. Two songs in he did sing us ‘I Pray When I’m Drunk’ (scoring the first fish mention of the night with mackerel) but any hedonism was confined to his recollections of a legendary Soft Boys’ gig back in 1980 in Paisley’s Bungalow Bar -several of the audience tonight proclaiming their attendance also.

Half the fun at a Hitchcock gig is seeing where his whimsical between song chats takes us and although a couple of them were familiar to anyone who was at his last Glasgow show, they have been refreshed. His Brian Ferry tales continue as tonight Hitchcock admitted to having accidentally written some songs for Ferry before going into a fantastical tale of how Hitchcock’s cat is on a retainer to deliver hair gel to Ferry, a task which at one point involved the cat piloting a plane to Rangoon. Maybe you had to be there but this had the audience in stitches.

A master surrealistic raconteur he might be, but Hitchcock also has over 40 years of masterful songs to draw on and he didn’t disappoint as classics such as ‘Queen Of Eyes’ and ‘Madonna Of The Wasps’ were unfurled. ‘The Lizard’, from his first solo album, was just superb ending with some fine notes wrung from his acoustic guitar. Songs from his most recent self-titled album showed that his pen is as acute as ever as he sang ‘Virginia Woolf’ (on her birthday as it happens) along with an incredibly moving ‘Raymond And The Wires’. The latter, written about his father and his love of trolleybuses, was prefaced by Hitchcock talking about Glasgow trolleybuses in a stream of consciousness fashion as he moved onto The Incredible String Band to Fontalla Bass, joining the dots all the way and totally entrancing.

Early in the show, Hitchcock asked if he could claim asylum once the independent republic of Scotland was set up (cue huge cheers). He returned to politics in his encore as, after masterful and moving renditions of ‘I Often Dream Of Trains’ and ‘My Wife And My Dead Wife’, he dedicated ‘I Want To Destroy You’ to Johnson, Trump, Putin and Rupert Murdoch. The song, as savagely sneering as ever, remains a perennial delight but there was new verse slipped in as Hitchcock sang, “A pox upon Fox media and all that he owns. He’s acquired Jerry Hall but was never in The Stones.” A cracking way to end a fabulous night.

Opening the show tonight was Annie Booth, an Edinburgh based songwriter who, despite appearing nervous between songs, offered a short set of idiosyncratic acoustic numbers delivered with conviction. Booth described her songs as, “depressing acoustic music” as she sang an intriguing ‘I Never Go To Church’ and performed some vocal acrobatics on the driving ‘Over My’. She was at her best however on ‘Still’, a song she normally plays on piano but managed well on guitar tonight. Not so much depressing as demanding attention and the audience listened to her songs in a respectful silence with some generous applause at the end.