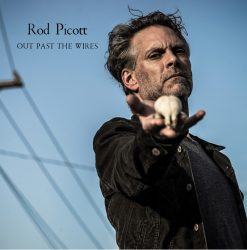 Rod Picott’s pedigree is prodigious and it shows in his music. In this album, produced by Neilson Hubbard in Nashville, he is framed by standout musicians: Will Kimborough, Lex Price, Evan Hutchings and Kris Donegan. His recent tour of the UK will have re-emphasised his stature. He says of ‘Out Past The Wires’ that it is “My most ambitious project of my seventeen year career.” And “The most satisfying recording I’ve made.” Those words stress how important this work is, and also how important our appreciation and understanding of it is, as well.

So, this really is a must buy album. There are twenty-two songs. All modern life is here! Music to listen to again and again, to sample and discuss, to dive into, enjoy, question, and appreciate the creative and moving power of Rod’s lyrics, the lasting appeal of his voice, with its description of modern life.

A journey through the songs is a personal affair. Bear in mind that the release of the album is synonymous with the publication of Rod’s short stories, also titled ‘Out Past The Wires’ where many of the characters in the songs have their stories expanded. With that in mind, start, perhaps with ‘Coal’. This is a hard driving track. Try to listen to this tale of the Pittsburg seam in an enclosed space, a car perhaps, hear Rex Price’s deep bass and Evan Hutchings’ drums in one speaker and in the other Will Kimbrough’s guitar, both emphasising Rod’s words, the snapshots of the decline of an industry: “dog fights” “rusted machines” and “steel tied boots”. And these brutal words: “We ain’t here to build your life, son,/ We just came here for the coal.” A standout track that makes an emblem of the decline of coal. Such feelings are echoed perfectly in Rod’s short story, ‘Coal Rod’, about Ben Cameron, whose hands “were stained a permanent black,” who took vengeance on a newly introduced, job-threatening, longwaller, a huge unit that rumbles back and forth along the face of the coal seam denying miners their soon to be lost jobs. In the story, take note of  “A faint ‘Ben’  traced onto the dashboard in a child’s stiff penmanship.” Unforgettable.

Any track on this double album will stand up to the deepest scrutiny. Here are some examples of tracks to start off an exploration: ‘Diamonds in the Dirt’, a simple song, just Rod and a guitar with the words, “Through the pain and through the hurt/ You’ll finds diamonds down in the dirt.” Exactly. This might be one of the whispered messages here. ‘Primer Grey’ – so unexpectedly moving! “You don’t need that flat and shine/ You just need to be hard off the line.” Here is a song that makes you sit up and listen.  ‘A Better Man’ is a rocking slide-guitar driven piece that epitomises the desire for improvement in life, learning from life, and perhaps suffering from it as well: “Memorized all the verses / Said goodbye in a hail of curses.” The song’s clever conclusion refers to a “trestle where I come from / where everybody scratched their name on.” but alas with his name is missing. BUT, wait a moment, in the distance there is  his name being sounded! Haunting again! Try also ‘Date of Grace’, the last track on disc 1, for its performance, for its words: “Picked the pieces out of the dirt and kept them as a token.” And, the quality and low key feeling, with its arrangement based on David Henry’s strings. So that is a lead in to where Rod Picott’s music is now. Ignore him at your peril.

Without any doubt, Rod Picott’s best album so far