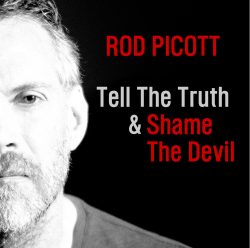 This is Rod Picott’s third album in almost as many years, but this one is a little different to his previous recent efforts. Songs on ‘Tell The Truth and Shame The Devil’ were written after a serious health scare that Picott experienced during the winter of 2018 and reflect on some of his life experiences and regrets – stuffed full of metaphors – and, as he himself says, has resulted in a “raw, honest and uncontrived” finished product.

This album is also different in that songs were recorded alone at home, just him, a guitar and harmonica and when finished, were handed over to the engineer to mix. The rawness is clear in the stripped back production and indeed in the songs themselves, and this results in a very intimate recording.

A lot of Picott’s poetry is rooted in a particular period in history; the mid-60s to late 70s are “vivid in my mind”. There are references to Sonny Liston and Cassius Clay (‘Mama’s Boy’), and Kennedy’s assassination (‘Mark’), alongside memories of ‘Sunday Best’ and some of the crappy jobs he had in the past (‘A Beautiful Light’). Songs revisit fork-in-the-road decisions and recognition that perhaps he could have done things differently pepper the album. “I’m the punchline of my own joke” (‘Ghost’), “I’m a fool, I’m a wreck” and “I’m my own enemy” (‘Guilty Man’), “Took every dream I had and cut it in half” (‘A 38 Special’ and a ‘Hermes Purse’), and “Wish I was in the folds of your dress” (‘Folds of Your Dress’) are just a few examples.

Metaphors for life in ‘Bailing’ and ‘Mama’s Boy’ are strongly defined. ‘Mark’ provides a sharp introduction to life’s harsh realities, the story of a school peer who committed suicide in high school and ‘Spartan Hotel’ reminisces on playing in a band in a low dive bar for “boozers and losers” in “this dying mill town”.

References to the health scare he experienced are found in ‘A 38 Special and a Hermes Purse’ and ‘A Guilty Man’, both songs trying to be both truthful and questioning. As Picott says “a brush up against mortality” will do that to a person. A sense of honesty butting up against….“Why?”

This is a very reflective album, a candid look back at the writer’s life, not always liking what he sees. But it is an honest album.

Frank and open, personal and reflective, a very intimate recording