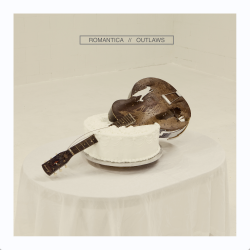 based Romantica have been around for quite some time, having four previous albums to their name. However, there is some poignancy in this release which has been compiled from leftovers and tracks by frontman Ben Kyle that didn’t make it onto earlier albums for one reason or another because he was struck down by Lyme Disease two years ago and is still on the road to recovery. The experience certainly impacted Kyle significantly and the compilation of this album appears to have been a therapeutic and necessary diversion for him.

There are ten tracks here incorporating two covers and a cameo appearance from Ryan Adams.  The covers – Leonard Cohen’s ‘Hallelujah’ and George Harrison’s ‘Something’ – are okay but nothing to get the juices pumping, with the best bits saved for Kyle’s own compositions. One of the best tracks is the album opener ‘Love In The Winter,’ a lilting piece with a nice gentle base backing and a few guitar breaks, which is followed by ‘Dear Caroline’ another light rock number delivered as an apology from a lover who has his own concerns with the way of the world. The most heartbreaking track is ‘Do Go Gently’ which is an ode to the singer’s grandmother replete with fond remembrances which many will connect with. What this all demonstrates is what a talented songwriter Kyle is and how much pain and anguish his recent illness will have caused him. And the Ryan Adams appearance – that comes at the end on the aptly named track ‘The Dark’ which is a stripped back live acoustic number and very good it is too – suggests there is surely light at the end of what has been a dark tunnel.