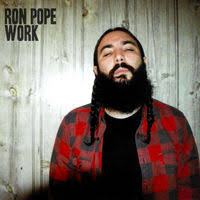 Ron Pope is living proof that if you can find a job you love, then you never do a day’s work in your life. Though paradoxically, to borrow a phrase from James Brown, Pope is currently one of the hardest working musicians in show business. “I wanted to work to live, not live to work,” says the braided singer who doesn’t work for The Man, but who runs his own Brooklyn Basement label (he used to be based in New York) from East Nashville with the help of his wife, Blair.
Not only has Pope been blessed with a soulful voice and a dab hand when it comes to putting a tune together, he has also amassed some impressive stats. Unlike Thom Yorke and Taylor Swift, whose detestation of music streaming has been extensively reported, Pope has no such qualms and has had 200 million hits on Spotify, over 638 million on Pandora and more than 150 million on YouTube; as well as selling 2 million downloads. To say Ron Pope is digital media savvy is a bit like saying the Pope is a fella who wears a pointy hat.

‘Work’ is a melange of dirty R’n’B, a bit of New Orleans funk, some old school soul, a lil’ country and some head shaking hoedownz, all infused with his irresistible orotund voice. Pope says that each track on the album takes him back to a different time in his life and various psychogeographical locations.

“On some of these songs, you can hear Nashville, on others we’re walking down the street in New Orleans giving away beers,” he reveals. “This album follows me from when I was thirteen and a teacher told my mother that I’d probably end up in prison.” Since then, every time that Ron garnered some press, his Mom would send a copy to the teacher. “It got to the stage where I had to tell Mom to leave it – ‘You have to let this go.’”

Speaking of letting go, Pope tips his hat towards Ray Charles for the funky-as-heck Let’s Get Stoned, which features some sizzling brass and was undoubtedly inspired by the Nickolas Ashford, Valerie Simpson and Josephine Armstead penned Let’s Go Get Stoned, which Charles recorded on hearing Ronnie Milsap’s version, soon after he had left rehab and treatment for his lengthy heroin addiction. (Bonnie Bramlett subsequently recorded a fantastic version too.) Not to confuse matters, but the trumpet player on Let’s Get Stoned is called Charles Ray!

This contender for the soul singer’s crown recently paid homage to the Queen of Soul when he was asked to perform at the tribute to Aretha Franklin at Carnegie Hall, along with Rhiannon Giddens, Rodney Crowell and a host of other famous fans. In a fetching blue suit Pope played a storming version of Aretha’s ‘Baby, I Love You’ – a great studio version of which can be found on YouTube, as it’s not on this album. Let’s get those numbers up even higher, eh?

Pope grew up in Marietta, Georgia, “Near all the music that influenced everything,” including his good self. “Little Richard, Otis Reading and the Allman Brothers are from Macon. Tom Petty is from North Florida.” Listening to the blend of styles on Work it’s evident how much his environment has had an influence on him. “There are country elements with the slide guitar, there are some New Orleans horns in the songs. There’s Wilson Pickett and the Allman brothers for sure.”

Recently Pope has been enjoying Chris Stapleton, Leon Bridges and Sturgill Simpson. He’s a big fan of Traveller. It would be fair comment to say Stapleton’s influence has permeated and can be heard here and there on Work. For instance, take Someday We’re All Going to Die on which Pope utilises his reflexive consciousness and acknowledges the awful, inevitable.

He rallies by declaring: ‘Someday we’re all going to die/God willing today ain’t the day/so pour me a drink/ give me one song to sing and I will be on my way.’ Ron’s detailed examination of his mortality is supported by some relaxing fiddle and banjo that sound like they were recorded way up in the Appalachian Mountains, along with a pleasing piano that brings sweet succour to paralysing thoughts of death and eternity.

Death. None of us want it, do we? I find it hard to imagine a world without the late Rayna Jaymes. Her passing a few weeks ago (I know, us Brits are a year behind) was a hard thing to take. It was a shock. Doesn’t it seem like only five minutes ago that Rayna and Luke Wheeler were fighting a bitter signing war over Mr. Pope? (Season Three: episode 17, obvs!) But very politely I’m sure, Ron told Wheelin’ Dealin’ Records and Highway 65 to shove it, and decided to opt for the life of an independent artist. Wasn’t it a good thing that he did?

The reward for a job well done, is more Work