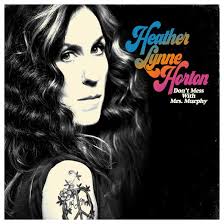 “When a man gives his opinion, he’s a man. When a woman gives her opinion, she’s a bitch!” so Bette Davis remarked some years ago. Thankfully things have improved since then. Not so much third wave feminism, perhaps nearer to a new wave of alt-country, Heather Lynne Horton has championed the maxim – Women are equal to everything – for just as long as Lord Hale has.
This ardent feminist who’s not afraid to stand up for herself and all she holds dear, the title of her new album Don’t Mess With Mrs Murphy should be a clue as to her pugnacious outlook. When she’s not embracing feminism or honouring her muse, she’s embracing her husband Michael McDermott, with whom she is one half of The Westies, or busy showering love on her seven-year old daughter, Rain.

Teaming up with her long-time buddy and producer, multi-instrumentalist extraordinaire Lex Price, who has provided a firm foundation for many a recording, from Rodney Crowell’s Close Ties and The Westies Six to the Out to Miranda Lambert’s The Weight of These Wings; they recorded the album at The Collard Green and Lera Lyn and Joshua Grange’s Resistor studios in Nashville. Heather’s ethereal voice shimmers with silver and majesty, sometimes bringing to mind the breathy tones of Ellen Foley and Liz Fraser. Many of the tracks on Don’t Mess with Mrs Murphy are saturated in a wash of reverb that Daniel Lanois would approve of; creating a dreamy, immersive, other-worldly atmosphere that slowly takes one over, the way walking through mist eventually leaves you soaked right through.

An outspoken advocate for disability rights, on Wheelchair Man Heather channels her empathy for the disempowered and disenfranchised men and women she encounters on the street and has helped at home in Chicago, and for whom it is a permanent struggle to survive.

‘I am a man/who cannot stand/to watch the golden ladies shuffle by/to their cars the envy of my eye/on their way to tighten silver curls/drawing straws for carpool with the girls/I am a man/ I cannot stand/ladders I will never get to climb/corporate or just to pass the time/dreaming days to forge a golden gate/bridges only birds can navigate.’

As poignant as she is poetic, Heather is a born observer, given to taking note of the daily minutiae that make up the riveting content of her songs, many of which demonstrate her compassionate outlook. The difference between pity and compassion is that compassion is an active emotion, being compassionate means you take action and get involved, something Heather is not afraid to do. There isn’t much she’s afraid of.

On the highly amusing but cutting F.U. Heather raises her pulchritudinous, svelte middle finger to all the miserable shit-bags who have ever done the dirty on her. But the song is primarily about a woman who stalked and tried to steal her husband. It kicks off with a brilliant opening line: ‘Jolene ain’t got nothing on you’. Given that Michael is a well-known musician, with a devoted following, perhaps such challenges go with the territory. But that don’t mean you gotta accept it, right?

‘I find you backstage/In stilettos and stockings/and you pretend that/it was me, that you came for/I give you a hug/cuz I feel sorry for you/and you try to bite me/but I’m made of nickel…Fuck you!’

Together since 2005, Heather and Michael are more than married and it would take much more than an obsessive fan to get between them. They were married while on tour in Italy in 2009 and Heather gave birth to Rain in July 2010, a short time before her first solo album Postcard Saturdays was released and she took a bit of time out, concentrated on bringing up her child and wasn’t in the studio or on-stage.

No stranger to taking her clothes off – she once did an “artistic pose” for a poster that advertised her residency at the Underground Wonder club in Chicago, with only her violin to protect her modesty – on the back cover of Don’t Mess With Mrs Murphy Heather can be seen doing a performance piece, posing naked with a shopping trolley and assorted ephemera, a powerful statement whose goal, Heather says: “Was to depict a juxtaposed Stepford Wife, and her reality-counterpart.  A woman trying to squeeze in all the seemingly clashing titles they and/or society have seemingly imposed upon them. My literal intention was to be on the border of ‘beauty’ and ‘decrepit’.”  This performance-piece is best described by Heather’s artist statement which she deconstructs as thus:

Heather says that this album “screams out the layers of sadness, fear and euphoria”, her good self and the majority of women “have placed on back burners and crammed into closets.” Unlike the shopping trolley though, Heather isn’t going to be pushed around. Her appealing bricolage exemplifies, as visual theorist Griselda Pollock, attests, that feminism is still “this complex harnessing and negotiated conflict, for we still have so far to go to enunciate our feminine predicaments and formulate effectively our expanded feminist challenges.” It’s those challenges that Heather will, no doubt, continue to take in her stride and will influence her muse.

And how delightfully has that muse been speaking to her. Apart from a hidden bonus track – a dazzling version of You’re The One That I Want which features a duet with Michael McDermott – two magnificent songs close out the album: Pauper Sky, an emotive song of separation and loss that shimmers with subtle luminescence, while the monumental I Wanna Die In My Sleep is Heather’s heavenly statement of unconditional love and devotion for Michael.

The sonic landscape Lex Price has fashioned for these tracks (as indeed, the entire album) is a deeply magical and exquisite place to spend time exploring. Don’t Mess With Mrs Murphy is another country. They do things differently there.

Amazing songs that get under your skin