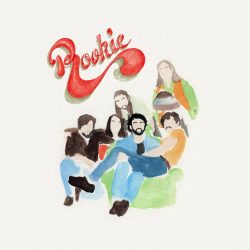 Bloody hell! Opening with ‘Hold On Tight’ the Chicago-based Rookie channel Boston, Grand Funk Railroad and much more, this album explodes into life as if sprung from the womb of 1975 midwest America. It’s all there: big guitars and drums, screamed vocals, doo-wop backing vocals, screeching guitars and even… Gawd bless ’em … phasing. It’s as if this reviewer has fallen through a wormhole into a glam rock haven forgotten by all but the most fabulous. This is not some grizzled singer-songwriter playing an ancient wooden thing and drinking whiskey brewed in the back yard; these boys are drinking Michelob with Jack chasers.

Next up is ‘I Can’t Have You But I Want You’ which channels more big names – the sneer of the Dolls but even more the swagger of Cheap Trick – again all big drums and guitars. The production is immense. ‘Sunglasses’ mellows the mood but still ploughing that AOR furrow of upfront vocals and sweet guitar hooks and even a sprinkling of pedal steel. It’s a country ballad on steroids. Keyboards to the fore on ‘Side of the Road’ and we are in LA driving song territory.

‘Elementary Blues’ sees some reflection with a sweet steel over a simple acoustic and vocal with a delightfully witty lyric that recalls Todd Rundgren and The Fountains of Wayne. The song develops in a very Todd way too; building layer upon layer and finishing with a spiralling guitar solo – a brilliant song – very West Coast and yet New York- ‘arguably the best looking jerk on the block, this is my time!’ Very classy.

This is a great debut. So many influences and so well put together. There is some consummate musicianship on display here and the flavours are absolutely mixed together perfectly. Derivative it surely is but it is done with such brio and pizzazz that they deserve to be (and almost certainly will be) big stars (pun intended).

Alt-Country this isn’t but big, ballsy American music it is! Dive in and enjoy.