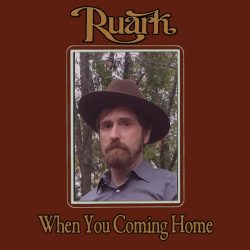 There’s something refreshingly low key about Ruark Inman and his band. Apparently, he grew up as a Skater Punk in his native South Arkansas and you can still hear some of that punk attitude on this recording, ‘When You Coming Home’, the debut album from Ruark, his eponymous band that consists of Ruark Inman himself on acoustic guitar and vocals, Alexa Joyce on bass and backing vocals and drummer Jeffrey Scott Greer, who also weighs in on backing vocals on some of the tracks.

As you might imagine with this line up, the band’s sound is a very stripped back one – a kind of Indie Folk/Rock band. They’re a little reminiscent of The Lumineers but less polished and in a good way. Inman himself has a nicely world weary voice that suits these folksy songs and the band do a good line in backing vocals, even if they are, predominantly, of the “ooh, ooh” and “la, la, la” type; but, after a while, you start to feel like they really could do with mixing it up a bit – acoustic guitar, bass and drums, with a laconic lead voice and ooh-aah backing, starts to get a bit repetitive after a while. Maybe Alexa Joyce’s voice is good enough to take an occasional lead, perhaps they could try for some more interesting vocal harmonies, maybe they need to change the instrumentation a bit. What they do, they do well but there’s a feeling that they need to do more. A three piece set up will always have its restrictions and they’ll need to find a way to ring the changes sometimes and challenge the listener’s expectations.

The band do deserve credit for being remarkably tight as a unit. It’s easy to think that, as they’re playing a fairly loose style of music, they can just shuffle through it but, when you listen to these tracks, you can hear just how in sync this band are. The opening title track ‘When You Coming Home’ is a perfect example of this. It’s got a loping rhythm with a few stop/start passages and the band are rock solid in delivering this. It’s all the more impressive when you realise that this is a part time band; Inman, away from the band, is a teacher, while Joyce is a librarian. Only drummer Greer seems to make his living entirely from music. It should be stressed that the group are in no way amateur – the band may be part time but the commitment comes across as 100%.

The songs on this album are good (as you might expect from a man who has a degree in music composition) but, again, suffer from a certain sameyness – this could be a result of them all being delivered by Inman himself. He may need to let go of his songs a bit or, maybe, try writing more with a partner and play around with tempo a little, though I suspect variations around a loose, shuffle groove are this band’s trademark musical style and they’ve clearly built an audience for it.

It’s very easy to like Ruark’s low fi, minimalist approach to their music and this is an enjoyable album – but the question that persists is “long term, is this approach sustainable?” Of course, long term sustainability may not be the band’s aim and we should enjoy this album for what it is – a collection of idiosyncratic songs delivered with well crafted simplicity.

Low Fi and laid back band from South Arkansas