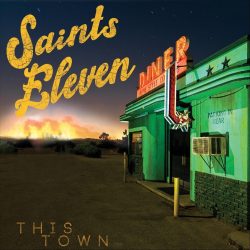 Saints Eleven frontman Jeff Grossman has been described as “an introverted soul” and “a little shy in person”, but you’d never recognise such a man by listening to his music: this is forceful southern rock, with forthright lyrics that have no use for purple prose, and vocals that he spits with complete conviction.

We’re straight into the thick of things with ‘My Home Is’, a song which starts with a country rift that shares similarities to the iconic intro to Merle Haggard’s ‘Mama Tried’, but we get progressively rockier from there. Lyrically, we tread a well worn path here; it’s the lure of the highway and life on the road fighting with the desire for a more stable home life. “Just one more run and I swear I’ll settle down / Right now the fans up in Fort Worth / They want us back in town,” Grossman sings. ‘Love In Hell’ too tells a familiar tale, this time of a relationship that’s dying, but the conviction added by Grossman’s sincere vocals make it a story worth retelling. “She don’t even really love me / So we’ll keep living this love in hell as we know it,” he confesses in the chorus.

The namesake of the album’s title ‘This Town’ is next; it’s a song about the memories we have of the places we grew up in, the memories of our first loves that are tied to such places, and of that desire to rid ourselves of the corresponding memories of first heartbreak – which in this song that is achieved by burning the place to the ground (“I wanna burn it down / Take it down to the ground and start all over / Sit here and watch it flame / Until i get sober”). ‘The Crown’ features the best vocals of the album: a bluesy drawl over a background slinky country rock.

‘Let Us Be’ is a real stomper of a rock song, invoking the likes of grunge legends Soundgarden and Alice in Chains. “Tell your children not to get high / While you drink a red bottle of wine / And then you tell the city council I can’t smoke here / You say it will kill me / What’s it to you? / I’m no puppet that you can fool / While you feed your family’s face through a drive through,” Grossman preaches, showing he has little tolerance for hypocrites.

The EP closes with ‘A Song For Smiley’, which shows the band in a more reflective mode. Grossman recently discussed this song in an interview – and while he didn’t share a name – it’s pretty clear he wrote it in the wake of the untimely passing of fellow Texas country music star Kylie Rae Harris. Anyone who followed the story at the time will know how the details of Harris’ death provoked mixed emotions, complicated sentiments that are reflected here as we’re reminded we’re all fallible (“We’ve all made mistakes a time or two / Done some things we probably didn’t mean to do / Lord I know I’ve had my share of them / It’s not my first won’t be my last / What’s it to you friend about my past”).

“Now go out in this world and make a friend / Find someone that’s down and out / Tell him it’s OK / We’ve all been there / Don’t be ashamed / Don’t be afraid / And I hope this song finds you well,” are the last lyrics Grossman leaves us with, and they’re words of togetherness that we could all use right now.