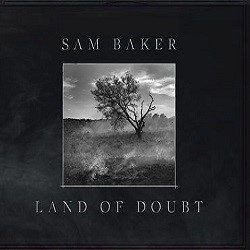 Sam Baker’s 2013 album, Say Grace, was a highly-acclaimed body of work, prompting one well known music publication to put in in the top 10 country albums of that year. It is difficult to see Sam’s latest offering, Land of Doubt, making that particular list. Not because it isn’t very good, because it is, but because this is such a unique album in musical terms that it defies easy genre pigeon holing.

Since his late arrival on the music scene 13 years ago, Baker has always combined pared down lyrics with sparse and subtle instrumental accompaniment. Land of Doubt takes that approach a step further and he delivers an album in the truest sense of the word. This is not one to stick on the ‘shuffle’ button or lose within the black hole of an iPod. This is an album that has been carefully constructed to give a gloriously rewarding listen to those who are prepared to step off the merry-go-round for 43 minutes.

In Baker’s own words “I wanted a cinematic feel, a mixture of sparsity and tension. And beauty, I always come back to beauty on my records. That’s shorthand for something that is bigger than me.”

The songs segue seamlessly into one another, linked in places by short musical interludes varying in length from 47 seconds to 3 minutes. These work together perfectly, the musicianship atmospheric and moody. Support comes from Neilson Hubbard, who also does such a grand job of producing, Will Kimbrough, Dan Mitchell and the strings of David Henry and Eamon Mcloughlin. Dan brings a whole new feel to many of the tracks with his ‘50s jazz trumpet, never more so than on the lovely Say The Right Words, a lament to the departure of a daughter leaving the nest on her wedding day and the sadness of those left behind.

Many of these musical interventions may be brief within the confines of each song, but the secret of the wonderful feel surrounding this album is the knowledge that less is often more. The subtle acoustic guitar work on Peace Out is another perfect example of this working its way into a song that is hung on a gorgeous piano riff. Where Fallen Angels Dwell is the longest of the musical interludes and brings all these musical components together in a beautifully played piece of music, the strings and piano very much to the fore here.

All the songs are written by Sam aside from one co-write with Mary Gauthier, and the poetic nature of the lyrics and the beautifully interwoven accompaniment combine to deliver a labour of love. This is an album that gets better on each listen, new subtleties discovered with each play.  If this is unlikely to fit into a top 10 country list this year that is only because this is not country. Shortlist for top 10 Americana 2017? Absolutely.

Beguiling and atmospheric album from a master of understatement.