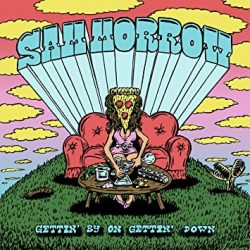 Sam Morrow’s fourth record, ‘Gettin’ By on Gettin’ Down’, is hiss most guitar and groove-driven album to date. Wanting to create an album that is rooted in grease, grit, and groove, Morrow focused on making his LP full of hip-shaking rock & roll, and he does so with great success. The album starts with ‘Rosarita’, a song which sets the tone for the whole album. As soon as you hear the first riff on the guitar, you know that it is going to get you feeling both chilled out with the groovy vibes it creates, but also on your feet dancing along. Ultimately, it’s a song about a woman who Morrow can’t get enough of, but actually ‘only brings him rain’. You feel like this song is very real with the detail of the lyrics and Morrow has experienced all of this himself.

The title track, ‘Gettin’ By on Gettin’ Down’, has such a strong Sturgill Simpson vibe about it. The slow distorted guitar sound has a very T-Rex feel as well and Morrow’s voice suits this style perfectly as he sings about how ‘gettin’ down’ is just a way of life.

The slow feel changes very quickly in the next song, and the standout of the LP, ‘Money Ain’t A Thing’, which is a great fast country song that really highlights Morrow’s song-writing skills and singing ability. Another song that feels like it could feature on Sturgill Simpson’s ‘A Sailor’s Guide to Earth’, the song details how everything can seem to be going well and then you discover you’re in the red, but most importantly, none of that matters,  as you should just keep on living your life.

The album falters in the song ‘Sit Crooked and Talk Straight’, which in a record that feels so new and fresh, feels so normal and like Morrow almost ran out of ideas in order to fill his song quota. But he shows that he can really do the slow song justice in ‘Wicked Woman’, which has this jazzy feel to it, alongside a great country groove as well.

Morrow’s ‘Gettin’ By On Gettin’ Down’ is a standout LP that deserves to rip through the charts and perform extremely well. The grooves that it contains is something that more artists should look to in the future when breaking into the Americana scene, and they should definitely look to this album for inspiration.