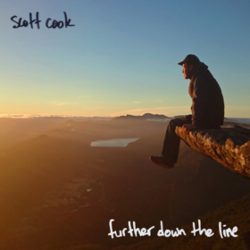 Studious Canadian-born Americana singer-songwriter Scott Cook was influenced by Woody Guthrie among others. Further Down The Line is a unique release in that it comes complete with a 132 page book; a celebration in photographs of his ten years in the business, one that’s seen him travel the world. He doesn’t stop there because the chords for the songs are also included, and there are also notes about those mentioned in his songs.

Cook’s great concern is for human rights, hence the general well-being of the world figures throughout the record. He holds little back when it comes to home truths. His version of Guthrie’s Walk That Lonesome Valley sees him add three verses; one each is dedicated to unsung American heroes; Sojourner Truth, Dan Berrigan and Chelsea Manning. With the bit between his teeth and some sensitive fiddle, mandolin and wonderful harmony vocals Woody would have truly enjoyed his version.

Scott’s measured, undaunted style as both a writer and vocally falls somewhere in-between Darrell Scott and Billy Bragg, in so much as he isn’t afraid to stand tall no matter what in the case of the latter, and there are other American singer-songwriters too. Fans of troubadours Ellis Paul and Chuck Brodsky would be well advised to check out Cook. His well-worked melodies are a true delight from beginning to end.

Among the finest tracks you have the beautiful, poetic Your Sweet Time, and a song dealing with how would Jesus be welcomed if he were to come back today If He Showed Up Now. Plus funky, feminist tune Fellas, Get Out The Way and of a somber feel Learning To Let Go. It is tailor made for Darrell Scott. Warmed in shuffling banjo, mandolin and lazy melody Cook rounds off the album in style, although I am not too sure about the occasional high note. As for words of wisdom, Further Down The Line isn’t so much Woody Guthrie inspired, but more a case him taking up the batten in unassuming fashion. His co-write with Benjamin Caldwell Alberta, You’re Breaking My Heart is in part chilling as he speaks in despair terms, and it is followed by arguably the best performance of the record Careful With My Heart (Heather Styka). Beautifully melodic and graceful it ticks all the boxes. Players Bramwell Park, Dana Wylie, Matt Blackie and Adam Iredale-Gray (and others) lend outstanding support throughout.