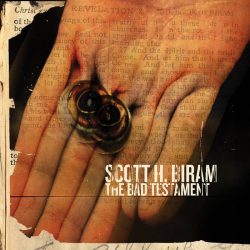 Biram peddles a scuzzy version of the blues, and on Set Me Free he sounds like someone who has lost their teeth the hard way and still comes up swinging. To his credit, he covers a lot of ground across these 13 tracks and, although the blues is at the heart of what he does, it certainly isn’t everything – he’s just as adept at more delicate forms. If Set Me Free is akin to cleaning your teeth with a wire brush, then Righteous Ways is a cleaner wrasse delicately flitting through the water, and Still Around contains signs of dexterity you might think beyond the reach of someone who can be so gut-wrenchingly amped-up punk as Train Wrecker.

After listening a couple of times, the album continues to surprise and amuse. Crippled & Crazy is nigh on standard Americana, albeit with a widescreen bent, and the acoustic guitar on Feel So Wrong could belong to one of the new Tacoma School of guitarists. Given the title of the album, you might expect some interaction with religion, and True Religion delivers some fire and brimstone like a field recording from the 1930s. It’s an album that occasionally smacks you in the face, babbles drunkenly at you, while occasionally imparting flashes of coherent wisdom -sounds like my kind of night out.