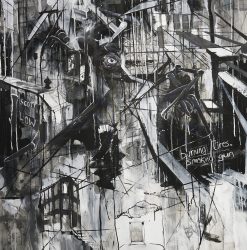 With his third solo album ‘Burning Tires, Smoking Gun‘, Scott Low, the former main man of Athens, GA based band Efren has produced a fine album that is simple in design, yet contains contemporary  messages that ponder many of the challenges in today’s society.  It’s nicely carried along by Low’s gritty and distinctive tenor voice and aided by a sparse arrangement that doesn’t get in the way of the messages being conveyed. Low is clearly a multi-faceted individual and he combines his musical career with running his creative retreat in the hills near the small town of Clayton in the north of the US state of Georgia, a safe and supportive place where creative and inquisitive minds can go and be, well, creative and inquisitive!Part artistic sanctuary, part idealistic vision for a better world, it’s a location and a lifestyle very much influenced by his wife and young family.  This is the home of a man whose principles are clearly articulated through the songs he sings.

Low appears to have crafted much of his music as part of a desire for cultural and political change and to galvanize that drive by drawing people together and inspiring them to take action or to simply reflect. ‘Burning Tires, Smoking Gun‘ has a focus on social justice aimed at topical issues such as poverty and hunger and Low’s own words reflect his deep-seated admiration for the troubadours who have come before.

“So many artists have begun speaking through their music about the injustices surrounding us.  We as artists have the power to help swing social movement or at least adjust some perspective. But, it still is our art, and must be diligently created with originality and respect for the traditions and songs that have come before. Say something. Do something. Don’t just be a singer-songwriter — be an artist.” There speaks a man who honours the musical past but whose personal ethos and beliefs around justice for the modern day are clearly deeply held and felt.

This is music that is far from being simply an old style political protest album, it’s much more than that. This is folk music for the modern day, music with an up to date social commentary, it’s direct, it’s heartfelt and perhaps its simplicity is it’s greatest strength.

If you want to know what type of music the likes of Woody Guthrie and his contemporaries might have penned had they been children of the seventies, then ‘Burning Tires, Smoking Gun’ may just be the album for you.