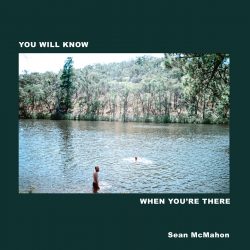 Here is a record that provides a tantalising glimpse of Americana in Australia. McMahon, from Melbourne, has a distinctive voice that resonates here – wistful at times, but always a winning, must listen to, and thoughtful sound. He has gathered around him, with producer Roger Bergodaz, a team of interesting Australian musicians including Kelly Day, Freya Josephine Hollick and Matt Dixon.

At once, what captures the listener, is the appealing tone of McMahon’s voice, its thoughtful nature. On the first track, ‘One Foot Out the Door,’ – a love song – there are conveyed in a lonesome, winning way, implied narrative clues about the situation: “It happens every time…” “Who are you trying to fool?” And the lasting image of “When you walk through the door…” More than enough to capture your attention and lead you on. ‘Angel At Your Back,’ the second track, has McMahon strumming the guitar effectively, his voice intoning: “There’s a hunger in your heart / That you can’t satisfy!” And “An angel at your back” with “Another by your side.” A satisfying, well produced, song.

‘Outsider Blues,’ another outstanding piece of music confirms the drive of the record and its musical and lyrical depth. Here is the story of an emotional relationship. The unease of “When you walk through the door” followed by the sadness of the reaction: “So. I’m going back outside.” The almost orchestral arrangement at this stage backs up this feeling, and you are left with the shattered protagonist, “unable to shake the news,”  “coming back / To the lonely outside blues.” This is high performance, moving lyricism.

‘Just For An Hour’ is the sort of track that holds a good album together. It is just McMahon and his guitar holding the listener with his lyrics, his private thoughts really, about another singer he admires. “The way you sang on Saturday night/ With all of your heart and soul,” the way she looked: “Your hair shone like gold.” Her technique:”You paint a picture so well,” the effect she had on the audience: “You had us all hanging on every word,” the way the lyrics worked: “Behind every sign/ There’s another story going on,” and the profound effect that the voice and lyrics have on a listener: “If I could be anything/ I wish I could be that story.” Interesting how McMahon here touches on the deeper understanding of the effects of a song.

The title of the album is ‘You Will Know When You’re There.’ Seemingly, McMahon has glimpses of being there in this collection of his songs. Perhaps this is conveyed by the picture on the cover of the record of a lake in Castlemaine, two hours north of Melbourne where McMahon’s record label holds a regular showcase. Who knows?

Briefly, then, the remainder of the collection. ‘Just To See You Again’ features Freya Josephine Hollick (a fellow Blind Date artist) accompanying Sean. The chorus, “I really want to see you again” and the influence of Matt Dixon’s pedal steel, both have a powerful, lasting effect. Another winning track, ‘Spring,’ the pre-released single for the album, is just as effective. The time of year traps you, “Coming into bloom in the spring,” the progression of the pedal steel heightened by the mouth organ, sound and words – all in all a carefully determined and moving track.

‘We May Never’ with Kelly Day (another Blind Date singer) accompanying, is an interesting track with western images: “You are the gold tied to my saddle,” “the rain after the drought,” “the trigger,” “the silence that drowns in the sand,” “the sun that comes out in the East”. “You are right out there at the robbery/ With bare nails and bleeding knees.” A slow revealer of a song with its slow rhythm, the fuzz guitar taking the bridge and those unforgettable lyrics. Outstanding.

The last three tracks continue this feast of original ideas. Make a point of listening to the whole album. Sean is an established Australian singer. The time has come for him to be appreciated by audiences in the UK and beyond.

A tantalising glimpse of antipodean americana from Melbourne-based singer-songwriter