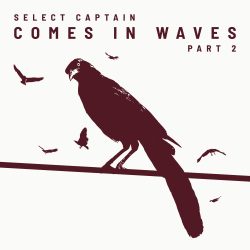 Select Captain have taken the Charles Dickens approach to releasing an album… one bit at a time. Or more precisely one EP of – in the case of Part 2 certainly – four tracks. Whilst this approach isn’t exactly original, Part 2 of ‘Comes In Waves’ should make the listener sit up in anticipation for Part 3, for this EP is an interesting and enjoyable collection of songs.

Formerly the solo project of Dane  Kristian Gaarskjær, Select Captain released Part 1 in October 2019 and Part 3, the final part is due later in 2020. Gaarskjær has now formally teamed up with Søren Vestergaard to produce an appealing sound mix of acoustic and electronic….electro-Americana anyone? The band cite influences such as Ben Howard and even Depeche Mode and opener, ‘Get Me Out of Here’ has a vocal effected in the style Dave Gahan, a slow burner of a track, evocative organ and picking guitar. ‘How Does It Feel?’ retains the style of the previous track with arpeggio piano across a steady rhythm and background synths and ‘Down and Down’ leans into a more typical folk song, guitar and vocal to the fore. Final track ‘Ride It Out’ brings back the electro sound and marries synths with a single cello, and it is this mixing of sounds to create a different one which underlines Select Captain’s signature, at least as far as Parts 1 and 2 of ‘Comes In Waves’ is concerned.

Easily digestible tracks in terms of duration, lyrically the record addresses personal themes of depression and anxiety but with a positive outlook, and this reviewer for one looks forward to hearing how the final ensemble comes together later in the year.