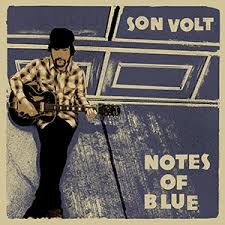 Son Volt was one of the most instrumental and influential bands in launching the alt. country movement of the 1990s that ultimately became Americana. “Notes of Blue” is the twentieth album to which Jay Farrar, the creative force behind Son Volt, has lent his voice and songwriting. Perhaps it is not surprising that someone who has been in the business for that long has come up with such a variety of styles on the album. The songs are said to be inspired by the blues, but not the blues as most would know it. It could have been, in sporting terms, a game of two halves if that was the way the album had been put together.

The first two songs on the album offer no clue as to what is to follow. Promise The World is a gentle acoustic led track with a twang and a hint of fiddle that fools the first time listener thinking a mellow 30 minutes is in store. Back Against The Wall retains the acoustic lead but here there is a solid groove and radio friendly rhythm that brings to mind a hint of Runrig circa. 1991.

Indeed, much of the album allows Jay to settle into a laid back bluesy feel with sparse accompaniment that allows his distinctive vocals to take centre stage. It comes as shock to the senses then when Static turns the amp up to maximum and a frenetic guitar blows away any idea that this will be a conventional ride.  Similarly, the raw slide on Sinking Down has a brilliant riff that elevates that track into the memorable category and is a world away from those openers.

This is an album that always keeps you guessing and wondering what is coming next. The tracks are short, with 10 tracks squeezed into 30 minutes, which, combined with the sudden changes of pace and sound, means it can be hard to get a real feel for the rhythm of the album. These are not bad songs, indeed there are some crackers, but the sometimes abrupt variations in style and tone may not be to everyone’s ears. But hey, isn’t that what the shuffle button is doing to us all the time?

10 tracks that keep you guessing, keep your attention and keep you listening