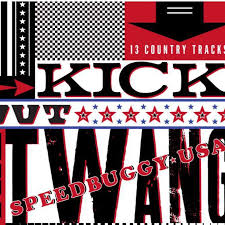 Speedbuggy USA are a classic sounding, country-rock and roll band coming out of Los Angeles with their newest release ‘Kick Out The Twang’. Taking inspiration from country acts like Buck Owens, Merle Haggard and American life itself and adding their own rock and roll twist, Speedbuggy USA take that inspiration and put their own stamp on it and they play it very well indeed.

‘Kick Out The Twang’ is an album that barely lets up from start to finish: from opening track ‘Take The Last Train to Clarksville’ with its distinct guitar sound, pedal steel and shuffling drums, all the way through to closer ‘Darlin’ I’m Coming Home’ the band keep the energy high and the songs upbeat with vocalist Tombo leading the charge throughout with his songs focusing largely on working, drinking and loving, a staple in country music since its earliest origins. However, there is plenty of gang chorus vocals, great melodies and enough originality present to keep things interesting throughout. The musicianship on offer throughout the record is second-to-none as lead guitarist Seth Von Paulus has plenty of stand out moments where he really lets rip, in particular on ‘South Bound’ where he has free reign over a drum breakdown to show what he’s made of and likewise, on album midpoint ‘Wood, Screws and Nails’ where his talent is highlighted from start to finish. Drummer Jamie Dawson almost never takes a break and his drum work from start to finish is relentless and really takes the energy of the record to the next level, complementing both the energy of the band and the songs themselves with carefully placed fills and solid beats which allow the rest of the band time to shine equally and the songwriting to be at the forefront making it clear that Speedbuggy USA are both a great band, and great songwriters.

The aforementioned energy throughout the record is interspersed with very few moments where the speed lets up, however, when the band do slow things down, they pull that off with the same level of expertise as the faster tracks, again, allowing their songwriting ability to be in the spotlight. Early track ‘Shaky Town’ is a standard mid-tempo acoustic country song about leaving a less than favourable town with pedal steel complimenting the feel of the lyrics and Tombo’s vocals taking centre stage and ‘Unchain My Heart’ see’s the band take a more blues heavy approach to songwriting, a style which is very suited to the versatility in Tombo’s voice and allowing the frontman his time to shine on a record packed full of excellent performances.

‘Kick Out The Twang’ is an excellent record overall and one that is sure to see the band’s popularity grow as more people look for an authentic sound amongst a sea of ‘bro-country’ bands. If the energy on the record is anything to go by, their upcoming shows here in the UK should see them gain a lot of new fans this side of the pond as they’re bound to deliver a good time.