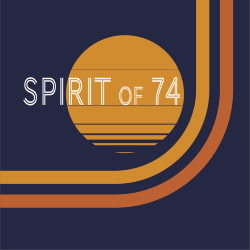 Spirit of 74 is a new project from musician/songwriter Oz Zeltner, formerly of Oliver Buck and The New Madrids and represents his first delve into a studio in more than a decade. Citing influences that include John Hiatt, Ryan Adams and Tom Petty, Zeltner has set out to capture, in the words of the press bio “songs reflecting on a lifetime of lived experiences as told through snapshots of transcendent moments.”

Only Zeltner himself can say whether he feels he has happily captured those moments lyrically in the eight tracks that make up the album but, musically, the album fails to inspire. With nothing to lift the album out of the unremarkable category, highlights are measured more in snippets of songs rather than the tracks themselves.

‘The Oncoming Storm’ perhaps hints at what might have been with its ominous helicopter sounds morphing into a driving intro and, as in other places on the album, some decent guitar work. With mentions of Moscow, the USSR and troops on the streets and “felt the shockwave before we heard the sound… and the ash fell down like April snow” is this a look back at Cold War nightmares that might have been? It is far and away the most lyrically engaging track on the album but, with no further insight from Zeltner himself available, its intent and meaning to the artist remains a mystery.

Alas, there is very little to lift other tracks out of the ordinary. This is mostly drum and guitar led rock/pop without anything that might be termed particularly radio friendly or overtly commercial. There are occasional variations in pace. ‘Lift You Up‘ for instance has a subtle organ intro and, with its slower tempo, offers some variety without ever really escaping the formula that has been laid down for the album.

Sorry to say that this is instantly forgettable stuff and leaves very little reason for a repeat play.

Formulaic album that fails to leave an impression