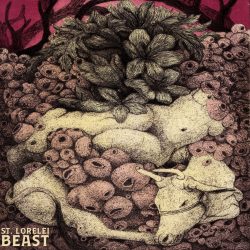 St. Lorelei is a new band fronted by Jo Morris, following on from her 2017 debut EP. Based in New Orleans, ‘Beast’ features her dreamlike and ethereal vocals on eight songs, all self-penned with the exception of Townes Van Zandt’s ‘Snake Song’, and sitting in a place where Southern Gothic influences shade into David Lynch’s Twin Peaks oeuvre. And a very atmospheric place it is.

Band arrangements are chilled, with strong emphasis on a retro feel, with lots of reverb on the lead guitar, putting one in mind of Richard Hawley’s recent output. On mid-tempo ‘Night So Dark’ the powerful instrumental section would not be out of place in a spaghetti western, and Morris’s vocals remind one of Grace Slick c 1967, as she sings “Never felt like this before/broken yet wanting more/ but this body was never mine”.

Opening track ‘Wish’ has echoes of the Velvet Underground circa ‘Sweet Jane’, with Morris’s vocals in the same musical vein as David Lynch favourite Chrysta Bell.

On the slow and moody ‘I’ll Hold You’ heavily distorted guitar from Alec Vance comes to the fore, its anguished tones in the solo creating an unsettling foil to Morris’s spacey vocals, where sometimes her high register voicing are more soaring vocalisations than clear expressions of narrative, a feature of several songs.

‘Fool’ starts with a strong hint of the Mamas and Papas ‘Dream a little Dream of Me’ before Morris takes us to wilder shores, singing “Take your sad joke and take your sad face and your sad hair”.

Title track ‘Beast’ opens with a spoken introduction, rather in the style of the Everly Brothers, but coming from a darker place, as Morris intones “Incantation, centuries old whisper through the rain/I heard the husk of a voice/no more human than mine” before name-checking Roy Orbison’s ‘In Dreams’ as the songs’ story develops.

The album ends on an upbeat note with closing track ‘Outside The Green’, inspired by the green styling of the code in the movie ‘The Matrix’, with lyrical lead guitar from Vance.

Unifying the many evident influences on the albums eight tracks, Morris’s distinctive vocals make for a memorable and affecting collection.