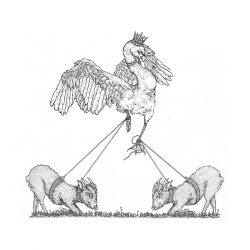 When is a band not a band? We might all agree that Bon Iver, Palace Music, Smog, Car Seat Headrest and the like are/were really just individuals masquerading as bands. Sure they might have a musical supporting cast helping with recording and playing live but essentially the creative identity of these ‘bands’ is down to one individual. Then we have, say, REM who were a true collective, a real ‘whole is greater than the sum of the parts’ experience. The new UK band St. Ove are somewhere between the two extremes and just about manage to balance the singular artistic vision of leader John George Cooper with the need to feel like a real crew with a mutual clarity of purpose.

St. Ove were assembled in order to present Copper’s songs to the world and despite the indications from that terrible name, the band are not a hastily arranged convenience. Rather they have been brought together from a mixture of long-time friends, musical acquaintances and ex-colleagues from a Thresher’s offie.

It seems that Cooper has spent a number of years resisting pressure to record his songs, prevaricating through nature-based displacement endeavours such as squatting with Foxes, testing out the psychedelic effect of legalised shrooms or attempting to become a bat professional. Eventually though, sitting around drinking out of date lager cast-offs and playing scruffy covers of Townes, Springsteen and Westerberg lost its lustre. At this point the newly formed band with Cooper himself on vocals and guitar, Steve Blackwell – drums, guitar, organ, Dan Akerman – bass, guitar and Adam Killip – guitar and vocals decamped from their native South East to Greenmount studios in Leeds. In a sprightly four days here they recorded the ‘County Show’ LP with producers Jamie Lockhart and Lee Smith.

On balance we can be grateful that Cooper was eventually persuaded into the studio with his thoughtful songs, which are often droll, with a wry attention paid to the drudgeries of everyday existence and a persistent counterpoint of distant melancholy. What we have ended up with is an engaging record, which is at once nostalgic and earnest with an undeniable swagger and confidence. ‘County Show’ remains a generous listen with a sound that is often bucolic and also vaguely psychedelic.

The band provide plenty of rhythmically propulsive, chiming guitar-scapes that could serve as a prima for the Paisley Underground perhaps. And therein lies the rub. In searching for a frame for these songs St. Ove draw heavily from a set of reliable but ever so slightly predictable influences. So on ‘Old Wave’ we have early REM jangling and rumbling. ‘Rain’ rattles along like some unearthed track from David Roback’s Rain Parade and ‘Foxglove’ offers jazzed-down slow-core via Tim Buckley and Will Oldham. Most unapologetically there is ‘South Street Werewolves’, chugging like it was actually recorded to be a close second cousin of its big city namesake ‘Werewolves of London‘, without the iconic chorus sadly.

First single ‘See You Later’ is the stand out here. Another dead ringer for a ‘Murmur’ or ‘Reckoning’ outtake but with a soaring melody and enough vigour and energy to lift the whole song skyward.  It rather puts the rest of the record in its place unfortunately. Whilst ‘See You Later’ is borderline majestic, the rest here is closer to prosaic, tending to the melodically indistinct with little to latch onto or to provide a point of real interest. In fact St. Ove even manage to make going to the pub sound like a melancholy experience. Opener ‘White Swan’ tells of Cooper’s dad’s “favourite watering hole” and how “there’s nothing like drinking in the White Swan”. The song may well aim to be a gritty verite celebration of the down to earth UK boozer but it’s unlikely to have anyone rushing to find the titular local in hurry.

St Ove don’t quite yet manage the empathic connection and singular voice of great bands. There is enough on ‘County Show’ however to suggest that this may come but there is a lot of work needed to get there from here.

Fine UK guitar chuggers still searching for their own voice