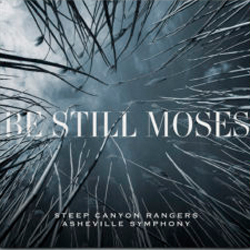 ‘Be Still Moses’ is a bit of a curate’s egg, partly bad, partly good, although, to be fair, none of it is really bad, just slightly over-egged. The album finds the Rangers teaming up with the symphony orchestra from their hometown, Asheville, North Carolina, performing a selection of songs culled from past albums and rearranged to accommodate the orchestra. It stems from a desire by the orchestra’s executive director to integrate the symphony orchestra with local musicians, a worthy cause to be sure and one which probably enriches the local scene but does it work on disc – are bluegrass and orchestras the new prog rock?

The answer is maybe yes and maybe no. There are moments here when the orchestra does amplify and swell the original songs. ‘Blow Me Away’ is given a Copland like grandeur with sweeping strings and the frantic instrumental showcase, ‘Auden’s Train’, is given extra ballast. However, some of the time the orchestra seems to be an uneasy graft as when the arrangements overcome the delicacy of ‘Easy To Love’ while ‘Let Me Out Of This Town’ is just far too fussy. The collaboration is most successful on the gentler numbers such as ‘The Mountain’s Gonna Sing’ where the strings and things sway with the band and on the John Hartford like ‘Call The Captain’ where the band are allowed to shine before a very impressive orchestral arrangement blossoms midway.

The album’s title song was the first fruit of this collaboration and it found some extra partners in the shape of Boyz II Men, the Philadelphia hip-hop gang. Their contribution gives the song a grand gospel feel although the spiralling strings of the orchestra seem quite out of touch here, more Broadway than gospel tent. Overall, the album is a brave venture and one which would probably sound more impressive in a live setting but, as with many popular music collaborations with orchestras, it might have been best to leave well alone.

Brave but not entirely necessary - are bluegrass and orchestras the new prog rock?

An uneasy alliance of bluegrass and symphony sounds