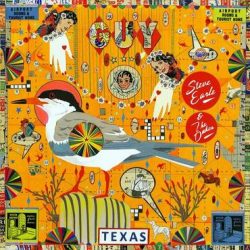 In Heartworn Highways, the 1975-shot documentary which now seems like a premonition of the Americana trend, we see an increasingly raucous Christmas Eve jam filmed around Guy Clark’s dining room table. In the background is Steve Earle, barely out of his teens and looking younger. He had just joined Clark’s band as bassist, and they spent the next 40 years bonded in friendship by their love of the song. When Clark died in 2016, Earle said that one of his greatest regrets was that he never wrote a song with Clark.

Instead, with this homage to his friend, ‘GUY’ is sixteen of Clark’s songs recorded in just a few days ‘as live’ with Earle’s well established and multi-talented band, The Dukes. Ten years earlier, Earle released ‘TOWNES’, his tribute to his other mentor, and was compelled to match it. A teenage Earle was once told by Townes Van Zandt to tie him to a tree in a vain attempt to stop him drinking, and Earle says about his two mentors “If you asked Townes what it was all about, he’d hand you a copy of Bury My Heart at Wounded Knee. If you asked Guy the same question, he’d take out a piece of paper and teach you how to diagram a song, what goes where.”

Lead off track ‘Dublin Blues’ adds keening pedal steel throughout, setting a pattern of changing the instrumentations of the originals whilst retaining the exact melodies, pace and tone. Fiddle, dobro and much more steel feature prominently, and Earle’s voice is much grittier than Clark’s, especially on the iconic ‘L.A. Freeway’, which somehow sounds just like the Clark version, whilst also heavier. The Dukes’ signature sound of driving guitars and drums get to grandstand in ‘Heartbroke’, which became a hit for Ricky Skaggs in 1982, but here their fervent delivery sounds very up to date. Earle knows and loves all sixteen tracks intimately, indeed six of them are from Clark’s influential debut album ‘Old No. 1’, which Earle himself sang on. As such, he says he plays Clark’s songs the way Clark played them, not slavish, but affectionate in his re-imaginings, reflecting his love of Clark the person. Final track ‘Old Friends’ brings together just that, with a narrative chorus featuring Rodney Crowell (who was also at the Heartworn Highways shindig and whom Earle replaced as Clark’s bassist) and many more of that generation.

When Emmylou Harris and Earle blend harmonies with ‘Old Friends, Shine like Diamonds’ over plangent pedal and brushed snare, the harmonica and mandolin introduced subtly under the repeated vocal, end a collection which works both as eulogy to Clark, but as a fine Earle album in itself.