Of course Steve Earle actually announced the new album quite some time ago – towards the end of his gigs last year Steve took time out to discuss his plans for a more obviously politically slanted album to be completed before the Presidential elections in 2020 and before that an album of Guy Clark covers, something like his ‘Townes‘ album.  True to his word, Steve Earle has announced that ‘Guy‘ will appear March 29th (or Exiting the European Union Day as we try not to think of it).

‘Guy‘ isn’t quite like the ‘Townes‘ album in as much that the set of 16 songs by one of Earle’s early songwriting mentors also features a stellar line-up of collaborators with that list topped by Emmylou Harris and Rodney Crowell.  It’s an album that came together quickly, which was no surprise to Earle, as he says “Guy wasn’t really a hard record to make, we did it fast, five or six days with almost no overdubbing. I wanted it to sound live… When you’ve got a catalogue like Guy’s and you’re only doing sixteen tracks, you know each one is going to be strong.”  The album also acts, he has said, as a way of closing off, in part at least, a regret: “as you live your life, you pile up these regrets. I’ve done a lot of things that might be regrettable, but most of them I don’t regret because I realize I couldn’t have done anything else at the time. With Guy, however, there was this thing. When he was sick — he was dying really for the last ten years of his life — he asked me if we could write a song together. We should do it ‘for the grandkids,’ he said. Well, I don’t know…at the time, I still didn’t co-write much, then I got busy. Then Guy died and it was too late. That, I regret.”

Here’s the rather lovely cover: 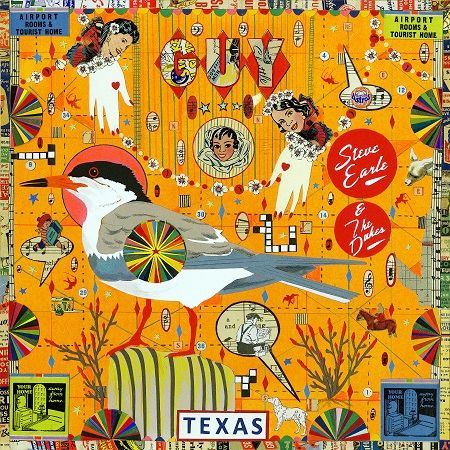 ‘Guy‘  certainly features some plum tracks, as shown by the album listing: