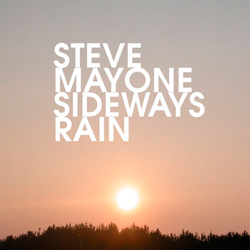 Brooklyn based Steve Mayone is one of those artists who generally get on with it. It being his daily graft as a musician, working with a host of others and finding time to release a series of albums which are well acclaimed. Indeed this site noted when reviewing his Long Play Record (2009) that it was “full of inspired songs which touches base with Americana, wistful acousticism and Beatles-style Power Pop.” He doesn’t get his name in lights but it is a guarantee of quality music.

Sideways Rain continues Long Play Records’ affiliation to classic pop with Mayone recalling at times George Harrison and The Travelling Wilburys along with some sparkling country rock but there’s also a swing into a slow and easy folk blues gumbo that is reminiscent of Dylan’s work with The Band and Jerry Garcia’s solo excursions. Pretty Mama, a sweet and evocative blues with horns and yearning guitar solos could sit with equal ease on Garcia’s 1974 solo album or Dylan’s Time Out Of Mind while The Long Way Home, replete with a honking baritone sax and gutbucket guitar, is great fun.

Despite its sunny disposition and the sweet country licks on Rescue Me the lyrics reveal a mess of trouble and it transpires that Mayone recorded this album in the wake of two bereavements, his brother and mother (the album is dedicated to both). Mayone has stated that the process of writing these songs was part of his healing process he has carefully crafted a set of songs that are uplifting but which at times touch on his loss. The opening Letting You Go is one song that refers directly to loss but it’s dressed in a sumptuous baroque pop string arrangement while the closing Save You seems to be more personal as Mayone tries to slip into the mind of someone who has no hope left. It’s a powerful song as he sings, “You say there’s no more stories to tell and your life has been a living hell. And it’d be easier for everyone if you went away.”  Wreathed in mournful horns the song is both a commiseration and a celebration. This sense of loss is perhaps most apparent on Strange Bird, a song that obliquely addresses death with the titular bird doomed from the start on a song that recalls the pastoral side of The Beatles (McCartney’s Blackbird for example) with soothing ecclesiastical organ and  a curling guitar solo.

Elsewhere Mayone dives into more traditional themes with the burbling Wilburys like So Many People Get It Wrong which address the issues of raising a kid and the rippling Early Morning Train (a nod to Gordon Lightfoot perhaps) which recalls Nashville country pop. The title song (written while Mayone was stuck in a hurricane) slopes along with lonesome pedal steel and stately piano with a melancholic grandeur that recalls Gene Clark.

A sparkling set of songs that address loss and life