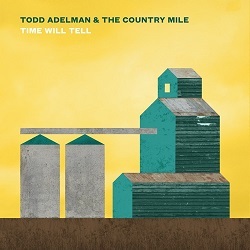 On his sixth studio album country-roots rocker Todd Adelman has a preoccupation with the passage of time, ageing and the myriad changes in his homelands. These missives from rural America are set to a traditional country-rock sound, with rumbling guitar licks, courtesy of Eben Grace, and Ben Gallagher’s piano which can move from subtle and in the background to stridently foreground and more than slightly honky-tonk. It’s a rich and rounded sound that was captured pretty much live in the studio, and all the better for it. Todd Adelman’s vocals are warmly shot through with experience, appropriate enough considering the subject matter of many songs. Starting with alliterative Tired of being Tired, Todd Adelman displays a restless weariness “I’m tired of this chair / And the clothes I wear / Same ol’ state of mind”.  It’s more than just personal weariness though, there’s a stop the world I want to get off view of continual and unwelcome change “Tired of the Fancy bars / And all of them foreign cars” ending with the question “Where’s the place I used to know”? It’s a theme that repeats through the album – the softly reflective Road of Time questions where the drive-ins, the five and dime stores and the ice cream man have gone, before laying out a nostalgic view of a lost America “built with farms and mills”. As the nation has grown, opines Adelman, the American dream has “begun
to rust”.

It’s not, though, just the young nation that’s moving into a confusing middle-age : Todd Adelman also addresses the effects of accruing age. Old man of the mountain takes stock of this, how old friends become strangers, how shared enthusiasms drop away until you’ve nothing left in common. You notch up thirty, forty years and suddenly there’s the realisation that “that’s not me anymore, not me anymore / It’s not what I’m looking for”. The combination of piano, Hammond organ and guitar conspires to give an epic depth to the insights of the song. To tornado proof any loose shingles remaining in this idea the next song nails it down firm – I’m not young anymore see’s all the facets of youth being shed – strength, freedom, and dream fuelled ambitions. All this to a floaty yearning accompaniment, weeping pedal steel and a light-touch rolling banjo which beautifully carries the stoic mood of the song. It sounds like that moment just before you pour yourself that consoling shot of whisky that you don’t really need.

There’s some outlaw swagger to My Town Too which not so politely tells the newcomer re-developers where they can get off. Todd Aldeman clearly isn’t so impressed with the bankers moving in and taking over. Underdog is an acoustic tribute to Bruce Springsteen, with just Todd’s vocal and thrumming acoustic guitar, whilst the closer Wild Women, Whisky & Weed goes a little bit Status Quo with it’s crunching blues-rock beat. It’s a not-too serious tribute to…well the predilections of a “freewheelin’ son of the redneck, white and blue”.  Factor in a clutch of tender love songs with a nice turn of lyric, and you have in Time Will Tell an album of some stature.

Six albums in and whilst time may be catching up with Todd Adelman his musical passion is undiminished.