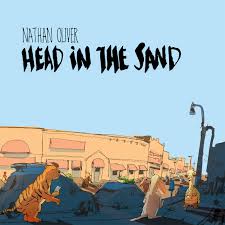 This 20 minute EP takes the listener back to a time when fuzzed guitars and shoegazing was not considered the social misdemeanour it is perhaps considered today (despite its reflowering this summer) . Nathan White IS Nathan Oliver – well, him and some fine pick up instrumentalists and this EP represents a return to recording after 8yrs off and took a year to record ( now that’s what I call a work ethic 1yr = 20mins of music) but it does have the feel of a serious piece of work despite its very solidly signposted influences and heritage.
Opening with the odd ‘Marbles’ which shuffles along in its idiosyncratic way before becoming ‘Clean Sheets’ less weird and more conventional. ‘The Exquisite Wait’ could be any London indie band from the mid 80s -90s – driving guitar – an Altered Images vibe. However the jewel in this EPs crown is the fantastic ‘Sing Blue Silver’ opening with a killer bass riff and some muttered vocals and nifty hi hat work the track builds and builds until a a riotous chorus that has you thinking The Cure or The Pursuit of Happiness with the vocals surfing over the increasingly sharp guitars. Great stuff and a future standard if it gets the exposure it deserves.
A highlight amongst some good but uninspiring stuff.