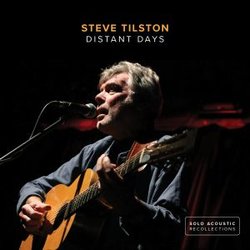 It’s not uncommon these days for more, ahem, ‘mature’, artists to cherry-pick and rework their own back catalogue in a bare-bones style. There can be any number of reasons for them doing so, including, but certainly not limited to, reclaiming those songs from record company shenanigans. Whatever the precise reasoning behind this particular solo acoustic retrospective, it’s a timely reminder of just how admirable Tilston’s work has been throughout the more than four decades (and even more labels) since his much-praised 1971 debut ‘An Acoustic Confusion‘ emerged on the Village Thing label.

That album, it is said, prompted even the notoriously frugal Rod Stewart to purchase an entire box-full to dispense as gifts and, had Stewart ever followed through on his rumoured plan to record that album’s ‘I Really Wanted You,’ then Tilston might well have become better-known, and probably substantially better off, than he is.

That’s not even the strangest of Tilston’s close encounters with the rich and famous, however. In August 2010, it was reported that in 1971 John Lennon had also penned a letter of support to the then 21-year-old folk singer after reading an interview in the sadly-missed ZigZag magazine in which Tilston admitted he feared wealth and fame might negatively affect his songwriting. The letter was never delivered and Tilston wasn’t even aware of aware of its existence until a collector contacted him in 2005 to verify its authenticity. “Being rich doesn’t change your experience in the way you think,” Lennon had advised in a note signed ‘Love John And Yoko’. The letter was the inspiration behind the 2015 film ‘Danny Collins’ and, as they say, you really couldn’t make this stuff up…

Be that as it may, ‘I Really Wanted You,’ his paean to young love’s confusion, is one of the excellent songs revisited here along with another fifteen originally heard on one or another of the albums rather sporadically released on a variety of labels, up to ‘Ziggurat‘, which emerged a decade ago. That 2008 album, incidentally, featured a song called ‘Pretty Penny,’ revisited here, which presciently predicted the financial crash a year before it devastated so many lives. There’s also a trio of unreleased instrumentals on an impressive and useful collection from a fine singer, thoughtful songwriter and superlative guitarist, who also contributes his own brief but illuminating notes on the selection.

Favourite songs by Steve Tilston given the bare bones treatment